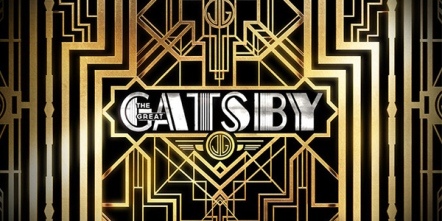 One of my more eagerly anticipated films of 2013 is “The Great Gatsby”. Originally set for a late 2012 release, the movie was eventually pushed back to an early summer opening date. It’s one of several film adaptations of F. Scott Fitzgerald’s classic novel which was published in 1925. I’m a huge fan of Fitzgerald’s masterpiece and recently reread it in preparation for this film. My love for the novel evoked two different reactions leading up to my viewing the movie. First was excitement at the possibilities of a truly great cinematic telling of Fitzgerald’s work. The second was concern over whether director Baz Luhrmann could capture that unique and graceful vibrancy that permeates every page of the novel.

Luhrmann, a 50-year old Sidney, Australia native, is best known for his modern retelling “Romeo + Juliet”, the Oscar nominated “Moulin Rouge!”, and the sprawling epic “Australia”. Each of these films embrace parts of Luhrmann’s distinct style of filmmaking, yet none of these lean as heavily on style as does “The Great Gatsby”. In fact, ‘style’ is a word that seems to find its way in nearly every review I’ve read. Many have viewed the film’s style as its strongest asset while others claim it stresses style over story and the movie suffers for it. To be fair, it’s impossible to talk about “The Great Gatsby” without mentioning its vivid, stylistic presentation. But does its visual grandeur and panache drown out the heart of Fitzgerald’s magnum opus?

Well let me get the style thing out of the way first. Luhrmann’s vision of “The Great Gatsby” is dripping with flamboyance and spectacle. It’s impossible not to notice starting with the incredibly cool opening credits. But some people have taken issue with the style saying it subverts any heart and feeling the movie may be going for. Let me say I disagree. “The Great Gatsby” is about several things, among those is the decadence and excess of the Roaring Twenties. Much of the movie’s style is spent indulging us in the excesses of the time. It isn’t just style for the sake of style. From the lavish party sequences to the lively speakeasies, the style is used to visually impress but also to draw us into the loose and raucous period. I found it to be very effective.

But for me the best visuals weren’t found in the wild parties with the gyrating dancers and showers of confetti. The movie certainly looked good there. But it looked even better when it was showing off the bustling city. The bright lights, the busy sidewalks, the tall buildings – it’s all beautifully realized through Luhrmann’s camera. We see it as midwesterner Nick Carraway sees it – as a surreal and exotic new world brimming with life. The visuals also shine in two different sequences where Gatsby takes his gorgeous yellow custom car “into town”. There’s clearly plenty of CGI trickery at work, but I felt these scenes were as wild and fast-paced as the lives these characters were living. This film also features one of the more interesting uses of 3D. It’s flashy when it needs to be, but often times it’s subtle in its implementation. I wouldn’t say it was completely necessary, but unlike most uses of 3D, here it added to my experience. 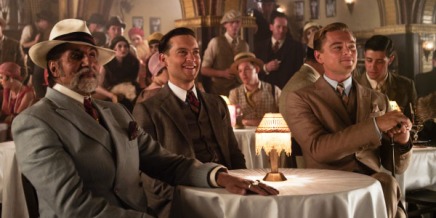 But enough about style and visuals. What about the story? As I said, “The Great Gatsby” is about several things. It touches on the decadence and self-indulgence of the filthy rich. It exposes the shallow nature of the upper class. It looks at the elation and heartbreak that accompanies true love. It examines the futility of trying to recreate the past. Like the novel, there are so many themes interwoven throughout this story, and I think it works here for the most part. This is in large part due to Luhrmann’s faithfulness to Fitzgerald’s work. I can’t say it’s as engaging or as enthralling as the novel, but so much is pulled from the pages that it left me quite happy.

The story revolves around the mysterious Jay Gatsby (Leonardo DiCaprio). Gatsby is an extremely wealthy man who lives in an extravagant mansion and is known citywide for his wild parties. No one knows who Gatsby is but everyone has an opinion. Everyone includes Nick Carraway (Tobey Maguire), Gatsby’s innocent and wide-eyed neighbor who also serves as our narrator. Along the way we also meet Nick’s lovely cousin Daisy (Carey Mulligan), her boisterous husband Tom (Joel Edgerton), and Daisy’s beautiful best friend Jordan (Elizabeth Debicki). Through Nick these characters are opened up and the mystery surrounding Gatsby is peeled back one layer at a time. But there’s a red herring neatly tucked away in all of this, and the story ends up about something much more satisfying. To look at this story simply as a tale of a mysterious rich guy is to miss the greater point. 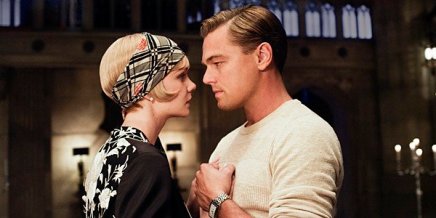 Luhrmann’s directing is a key part of the movie but the film would never work without its great performances. The tone of each performance is unique in that it not only captures the characters of 1922, but also an older style of acting. DiCaprio is perfectly cast as Gatsby whether he’s being the handsome, wealthy, but secretive party host or tackling some deeper emotions later in the film. Carey Mulligan is also good as Daisy and Tobey Maguire, an actor I’ve never been excited about, really surprised me. I loved Joel Edgerton as Tom. It’s said Ben Affleck was initially sought after for this role, but I think Edgerton knocks it out of the park. But it’s newcomer Elizabeth Debicki who’s a real scene-stealer. I gravitated to her each time she was on screen, and I kept wishing she had more screen time.

Many people have had numerous problems with the movie, and I would love to say they were wrong. But while I like the film more than many, it does have a few shortcomings. While I did feel the movie had heart, I don’t deny that there is a coldness throughout the picture particularly in a key relationship. This leads to a brief lull halfway through. I also felt the movie would be better if they had decided to include the romantic tension between Jordan and Nick that we get in the novel. It would give the movie more warmth and provide both characters with more to do, especially Jordan. I also felt the soundtrack was all over the place. When it’s playing the jazzy music of the time or a variation of it things are great. But then we’ll get sudden injections of Jay-Z rap tunes which feel terribly out of place. I’m not sure what the thinking was, but I found it odd and distracting.

Baz Luhrmann may be trying to capture the vivacity of F. Scott Fitzgerald’s novel through his visual style, but I think the story itself retains plenty of that for my taste. In fact I had a lot of fun with “The Great Gatsby”. It respects its inspiration by sticking to the story, and some really strong performances help ensure that this isn’t strictly a visual spectacle. This may not be a perfect movie, but I found myself wrapped up in it. It’ll never supplant Fitzgerald’s novel as the greatest telling of this mesmerizing story, but as far as adaptations go, this one really succeeds.