I can’t imagine that George Lucas ever thought that his 1977 science fiction epic would give birth to five sequels/prequels and become one of the most beloved and prosperous franchises in film history. Yet that’s exactly what happened with “Star Wars”. The unmatched fandom that followed spurred tons of merchandise, an expanded universe, an animated series, global conventions, and eventually a multi-billion dollar sale of the property to Disney. To say the Star Wars franchise has been successful is an understatement of epic proportions.

And it all started with “Star Wars” in 1977. Also known as “Star Wars Episode IV: A New Hope”, the film is said to have found its genesis in the mind of George Lucas around 1971. It would undergo multiple story drafts and an arduous production before making it to the big screen. Many people, including several working on the film, saw it as a sure failure but Lucas pressed on finally gaining studio support which helped quell the complaints aimed at its rising budget and numerous delays. In the end it cost $11 million to make – a drop in the bucket considering this one film alone has brought in $775 million.

But what about the film itself? Is it worthy of the accolades it has received from critics and fanboys alike? Has it aged well and weathered the days of special-effects advancements? Better yet, has it weathered the numerous tinkerings of its creator George Lucas? My answer is a clear and unequivocal “Yes”. Despite the years that have gone by and the shifts in the direction of modern movies, “Star Wars” remains a brilliant bit of filmmaking and a true testament to the magic of cinematic storytelling. 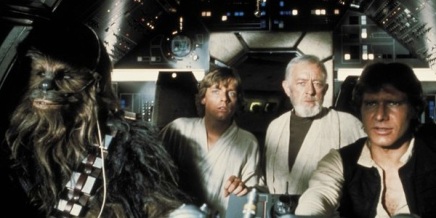 Everyone knows the story of “Star Wars” right? A young guy named Luke Skywalker (Mark Hammill) lives a dull life with his aunt and uncle but dreams of life in the stars. But things aren’t as rosy up above as he thinks. An evil and oppressive Galactic Empire is waging a war against a small but potent rebellion. The rebels, led by Princess Leia Organa (Carrie Fisher), are finding their victories to be fewer and fewer. Things only get worse for the Rebel Alliance after the Princess is captured by Darth Vader (David Prowse and voiced by James Earl Jones) who is in search of secret plans and schematics taken by the rebels. Luke is drawn into the conflict and along the way encounters an assortment of characters, many who will impact his life forever.

Luke comes to possess the best buddy robots C-3PO (Anthony Daniels) and R2-D2 (Kenny Baker). He encounters Ben Kenobi (Alec Guinness), an old hermit believed to be crazy but who actually introduces Luke to a mystical power known as The Force. He hooks up with an arrogant smuggler named Han Solo (Harrison Ford) and his tall hairy sidekick Chewbacca (Peter Mayhew). There are so many other smaller but equally memorable characters that fill this world that Lucas has created. In many ways it’s the characters that give the film such life.

But “Star Wars” should also be recognized for its phenomenal achievements in the area of special effects. Lucas created Industrial Light and Magic to make sure the visuals in Star Wars were top notch. At the time they certainly were and even without Lucas’ enhancements in later years, the Star Wars special effects marked exciting strides forward in terms of what filmmakers could create visually. ILM would go on to be one of the single greatest special effects studios as evident by their work in a wide assortment of other films.

“Star Wars” was a rare phenomenon that blossomed into a beloved franchise whose popularity and influence can be seen across the globe regardless of age. It’s a composite of great science fiction, fantastic storytelling, groundbreaking visual effects, and a compelling mythology. It has formed an undeniable legacy that will still be around long after I’m dead and buried. Most people have seen a Star Wars movie. Everyone has heard of it. And it all started with this big gamble that culminated into a box office sensation. Yet for me it’s more than that.

“Star Wars” is indelibly latched to my childhood and has remained with me throughout my adult years. Now I have the joy of sharing it with another generation. My kids love it just as I did and that is a treasure in itself. So whether you love George Lucas or hate him, you can’t deny that he’s given cinema a great gift. In fact he’s given me one of my best motion picture experiences and I never grow tired of revisiting the wonderful world he created.