It’s been waaay too long since I last did a Phenomenal 5 from my year-by-year series. It’s time to correct that. Several months ago I started at 1980 and now we have reached 1984. Talk about a HUGE year for movies! 1984 featured so many films that became pop culture classics. In fact, the strength of the year’s movies will best be realized by looking at the great flicks that didn’t make it on this list: “Ghostbusters”, “Sixteen Candles”, “The Terminator”, “Romancing the Stone”, “The Killing Fields”, “Beverly Hills Cop”, and “Top Secret!” just to name a few. Like I said, talk about a HUGE year for movies. So considering that, it would be foolish to call this the definitive list. But I have no problem calling these five movies from 1984 absolutely phenomenal. 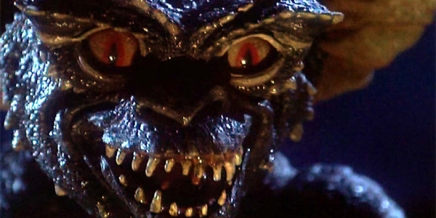 Was it a comedy? Was it a family film? Was it a horror picture? Well I guess you could call “Gremlins” a little of all. Regardless of what category you put it in one thing is for certain – it was a huge success and a fun, fun movie. Directed by Joe Dante and with Steven Spielberg serving as Executive Producer, “Gremlins” was a unique mix of several genres. It starred Zach Galligan as a young man who is given a strange pet from Chinatown called a Mogwai. The cute little creature is named Gizmo but he comes with three very, very important rules. Of course every rule is broken and soon the small town of Kingston Falls is overran with the vicious and violent offspring of the cute little Gizmo. The movie received a lot of criticism for its violence and it was a key reason for the PG-13 rating being implemented. But I loved it as a kid and I can easily say I still love it today.

Look, I know some will immediately start rolling their eyes at this pick and I fully admit that nostalgia may play a huge role in its inclusion. But I love “Red Dawn” and I still think it holds up today. Many people dismiss it but I still remember how well it worked back in 1984. Today the political landscape has changed therefore many younger viewers may not have the same attachment. But I still find it a compelling story that does a good job of creating characters you care about and putting them into an impossible situation. Unlike the horrible remake, the original did a much better job developing the emotions and relationships between the kids as they hide in the mountains after an invasion of their home town. They aren’t military savvy or skilled at weaponry. They just want to live. And that’s a key dynamic that worked so well for me. A great movie from 1984.

I realize that a large number of people had problems with this movie. I’ll also give you that this is the weakest film of the original three. But I still really, really love “Indiana Jones and the Temple of Doom”. It has been criticized for numerous things most notably its violence and its attempts to gross out the audience. These things (along with Gremlins) were used to lobby for the PG-13 rating that we have today. But there are so many great moments and memorable scenes. I absolutely love the opening in Shanghai and the bridge scene close to the end is one everybody knows. I could go on and on. The mine car chase sequence. The room full of spikes. Harrison Ford is a blast as Indy and his sidekick Short Round actually manages to be funny but not annoying. Lucas’ story and Speilberg’s direction gel nicely and even though there are a couple of speed bumps, overall it’s an unforgettable movie.

If you have not taken the time to see “The Gods Must Be Crazy” you are missing out on what I think is one of the funniest movies ever made. Yes that’s high praise but I think it’s well deserved. This South African comedy written and directed by Jamie Uys is guaranteed to be unlike anything you’ve ever watched before. The story is actually composed of three stories that all come together in the end. Xi is a Bushman from an isolated tribe on a journey to throw an evil “thing” off the end of the Earth (it’s a coke bottle). Andrew is a bumbling scientist studying animal behavior near the Kalahari Desert. Sam Boga leads a band of incompetent bandits who are on the run. But the real star is the sharp script from Uys as well as his quirky style of direction. It all works perfectly to form an insanely funny film that shouldn’t be missed.

The 1984 movie year is known for a lot of things. For me it will probably be most remembered as the year Joel and Ethan Coen made their directorial debut. The Coen brothers are two of my favorite directors and “Blood Simple” certainly launched them on the right foot. In fact, it’s impossible to watch “Blood Simple” and not recognize the familiar traits and undeniable style that would go on to be signatures of the brothers in their movies that followed. This twisting neo-noir tale changes direction on numerous occasions and it keeps you glued to the screen. A brilliant script (written by the brothers) anchors the film and some fine performances from Frances McDormand, Ray Getz, M. Emmet Walsh, and Dan Hedaya just make it better. There are lots of great movies from 1984. For me “Blood SImple” is the cake topper.

So there are my 5 Phenomenal Movies from 1984. I know many will have their own personal favorites. Please take time to share them in the comments below. If you agree or disagree with my choices, I would love to hear from you.