I’m not a racing fan so the story of Formula One rivals James Hunt and Niki Lauda was new to me. Ron Howard’s biographical sports film “Rush” tells the story of these two men and the rivalry that grew between them. Filmed with flash and gusto, “Rush” mixes common sports movie techniques with its more serious dramatic focus. The result is a film centered around an intriguing relationship between two racers that generally plays out fairly well. Unfortunately there are some kinks and wrinkles which keep the movie from being as smooth as it should have been.

Folks in Europe will be much more familiar with the story of Hunt and Lauda. These two championship racers were as different as night and day. James Hunt (Chris Hemsworth) is a talented driver who is more interested in the excesses of alcohol and sex that accompany his fame. He flies by the seat of his pants both on and off the track. Niki Lauda (Daniel Brühl) has no interest in accolades or fame. He is a by-the-book fellow who takes a cold and calculated approach to everything he does from racing to relationships. According to the movie Hunt and Lauda get off on the wrong foot and their drastically different approaches to racing and life constantly clash. 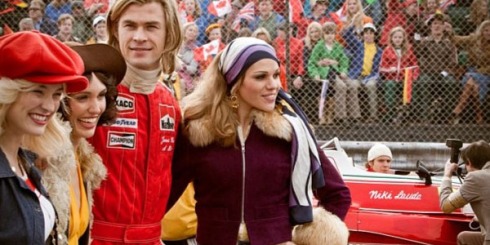 Interestingly neither of these characters are particularly likable. Peter Morgan’s script unveils their strong competitive wills which are inseparably tied to their inflated egos. They just show their haughtiness in different ways. But their rivalry takes a different turn during the 1976 Formula One season after Lauda is involved in a fiery crash. He is severely burned and faced with an excruciating rehabilitation. During this time Hunt is able to take the season points lead and looks to be on track for the championship. But only 42 days after his accident, Lauda attempts a comeback that defies all odds.

“Rush” offers a fascinating and personal story and we get hearty bites of it here and there. But there is a really odd structure to the film as a whole. A big hunk of the movie deals more with their individual rises to Formula One status. Sprinkled in are some brief run-ins they have and of course the races themselves. This does a good job of defining them and their vices but it also takes a lot of shortcuts. For example the two main female characters are shoehorned in and not given much to do at all. Olivia Wilde plays a supermodel who suddenly marries Hunt but later develops an off-screen romance with Richard Burton after being shunned by her husband. It’s a paper-thin side story. Equally underdeveloped is Lauda’s quick marriage to Marlene (Alexandra Maria Lara). The couple do get a few good moments but she is mostly reserved to standing at his races looking terribly concerned. 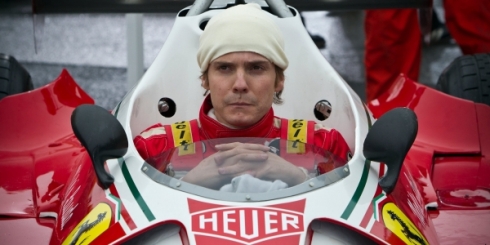 Speaking of those races, they are some of the most exhilarating race sequences ever put on screen. Ron Howard’s energetic and pulse-pounding perspectives truly are amazing to watch. Also a ton of credit has to go to the editing team of Daniel Hanley and Mike Hill. Far too often race or car chase sequences are chopped up into pieces making it almost impossible to discern what is going on. Hanley and Hill never make that mistake. Howard’s vigorous touches and technical flare gels perfectly with his editors’ approach to create some truly intense racing action. Howard also has a ton of fun playing in the whole 1970s period whether it’s the hair, the wardrobes, or the atmosphere. It looks great and I loves all of that stuff.

But back to the film’s structure. Lauda’s wreck and attempted recovery (which features prominently in the trailer and in the real life story) feels under-served. It does play an important part in changing the direction of the plot but it felt like there was much more there to explore. There were also several sports movie gimmicks that are frequently used. For example most of the races are shown with the voiceover of a highly dramatic announcer. The amazing visuals reveal to us the immense danger, the sometimes terrible weather conditions, etc. But that doesn’t stop the announcer from ratcheting up ever ounce of drama. 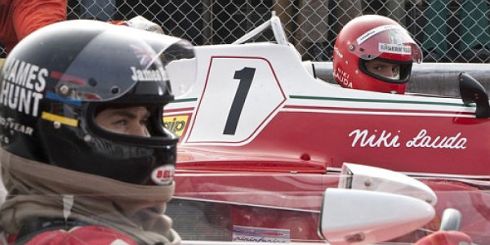 The real statement of the film comes from Chris Hemsworth. He more known for his role as the musclebound hammer-wielding Thor from the Marvel movies, but here he shows a definite range that may come as a surprise to some people. He jumps headfirst into Hunt’s life of overindulgence and he never oversells it. Brühl clearly is working hard but ultimately I think he is shortchanged by Peter Morgan’s script. He definitely has some strong moments but more often I found him to be a bit dull. It’s hard to put the bulk of the blame on him though.

Overall “Rush” is a sports biopic that doesn’t full utilize the intriguing story it is based on. That’s not to say it’s a bad film. The are some good dramatic moments and the race scenes are things of fuel-injected beauty. But there are some narative hiccups and I just can’t help but think the film could have better used its time. For example, maybe a few less music video-styled sex scenes and more time spent on the two main female characters. I just feel that there is more to this story that could have been told and ultimately that left me wanting.