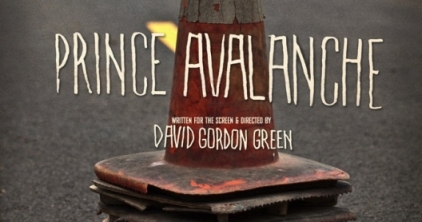 Good luck trying to classify David Gordon Green’s “Prince Avalanche”. Green directed and wrote the screenplay for this odd little independent film that is part drama, part comedy, and part offbeat character study. It was inspired by an Icelandic picture titled “Either Way” only here it takes place in an isolated woodland area in Texas. It’s a 2013 film that didn’t get much press and brought in less than $200,000 during its very limited release. But now word of the film is starting to ease out and that’s a good thing.

Paul Rudd plays the starched, tightly wound Alvin. He’s a highway worker who hires his girlfriend’s airheaded but well-intentioned brother Lance (Emile Hirsch) to help him paint yellow traffic lines on a long stretch of isolated roads. The roads wind through a forest area that has recently been ravaged by wildfires. This is the dreary, near apocalyptic landscape where the entire film takes place. We just follow along watching Alvin and Lance go through their workday. We sit with them at their camp enjoying a plate of grilled fish and coffee. The story is truly that simple but Green is quite clever in how he opens up these characters to his audience. It’s amazing what all we pick up just by listening to their many conversations. 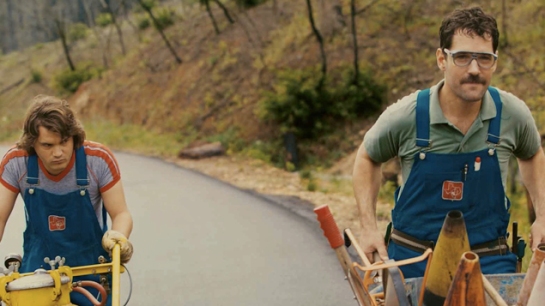 There are a number of pleasant but telling scenes early in the film. It becomes clear that Alvin and Lance are distant. In many ways they’re very different people and they obviously don’t have a longstanding relationship. Watching the slow-moving male bonding is good fun and it tosses in several well-conceived laughs. But it also connects us to these characters so that we are invested once things get rough. And they do get rough. The two personalities clash and some humorous scenes follow. But these problems end up revealing a lot to each one about themselves. That’s when the true meaning of this film surfaces.

This is a slow and meditative story that spends a lot of time on simple observation. Just watching and listening. Both Rudd and Hirsch are fantastic They both unwrap these two characters exposing their charms and faults with great clarity. Alvin is a man who desperately needs to break out of this lonely world he has created for himself. In it he sees what he wants and ignores important elements to life. Lance needs to realize he is no longer a child. He has to grow up and take responsibility. These two very different men with very different problems are actually in a very similar boat.

“Prince Avalanche” is an independent film through and through. David Gordan Green adapts and directs this light but crafty picture that made me laugh often. But it also develops two really good lead characters who despite their eccentricities are very human in more regards than you may think. This is a tightly made film that has heart and humor and it’s able to deliver it in a way that most bigger modern films can’t. I really appreciate that.