I can’t tell you how excited I was when Nostra from My Filmviews asked me to be the first person to participate in his newest Blogathon Relay. If you aren’t familiar with My Filmviews it is a great place for movie reviews, features, and great actor/actress visual spotlights. Please check out the site. Trust me, it’s well worth it.

Nostra’s entire relay concept is brilliant and it’s one of my favorite ideas for a blogathon. This particular relay was very appealing to me. It revolves around the most iconic movie characters in cinema history. Ooooh this was tough for me. After a few days of laborious deliberation I had my choices narrowed to three: two who were sentimental favorites and the eventual winner.

Now before I jump in, here are the official blogathon rules from Nostra: A list of 10 iconic movie characters has been made. That list will be assigned to another blogger who can then change it by removing one character (describing why they think it should not be on the list) and replace it with another one (also with motivation) and hand over the baton to another blogger. Once assigned that blogger will have to put his/her post up within a week. If this is not the case the blogger who assigned it has to reassign it to another blogger. After you have posted your update leave the link in the comments here and I will make sure it gets added to the overview post.

Before I make my addition and subtraction let’s take a look at the list of iconic movie characters that currently occupy the Top Ten:

Definitely some iconic movie characters on this list and removing one proved to be more difficult than I imagined. I eventually narrowed it down to two. That didn’t make the choice any easier but such are the rules of the relay. Someone had to go.

Yes that look he is giving scares me as I type this. Samuel L. Jackson without a doubt gives us an amazing character that really stood out in Tarantino’s “Pulp Fiction”. But the word that kept sticking in my head was ICONIC. Winnfield is fun, entertaining, and you can’t take your eyes off of him, I’m not certain that I would place him among those who we call movie icons. When I think of the impact others from this list have made I just don’t think Jules quite makes it to that level. Great character but not quite iconic.

Whew, now that the unpleasant part is done we get to the equally difficult but much more enjoyable part. I get to add a replacement who I think truly represents a movie character icon. 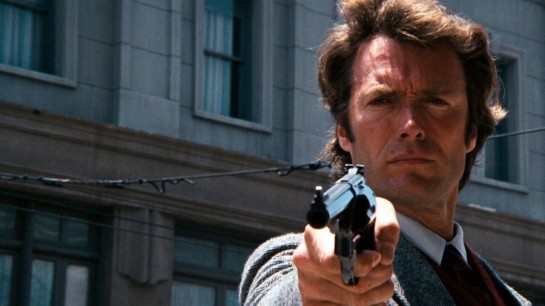 When I think of an iconic film character I think of someone who has become synonymous with movies and pop culture. Someone who was not only popular during their time but who still is well known and recognized today. One of my genuine favorites is “Dirty” Harry Callahan. Throughout the 1970s and into the 1980s Clint Eastwood starred as Callahan in five movies. As a grumpy, non-conformist San Francisco police inspector, Callahan blasted his way through police red tape and literally through an assortment of bad guys. Armed with his signature .44 Magnum and that unmistakable Clint squint, Callahan became a big screen icon who spanned two decades. He’s left us with so many memorable scenes and of course those memorable lines such as “Do you feel lucky, punk?” and “Go ahead, make my day.” If that doesn’t point to an iconic movie character I don’t know what does!

So there you have my subtraction and my replacement. Another special thanks to Nostra for including me. It was a ton of fun thinking this one over and coming to my conclusions. Now it is time for me to pass the torch. I’m happy to pass the baton to my pal Ruth from Flixchatter (click the banner to link to her phenomenal site).

Ruth will not only bring in our first bit of female perspective but she also has a great taste in movies. I can’t what to see what she is going to bring to the table. Take it away Ruth!

39 thoughts on “The Ten: Most Iconic Movie Characters Blogathon”