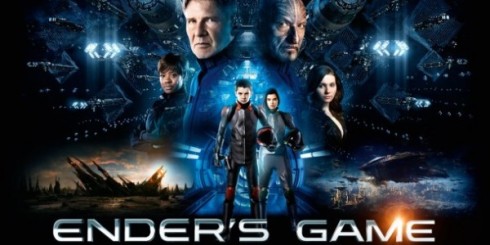 It would be easy to lump “Ender’s Game” in with the current trend of science-fiction films centered around young people. These movies seem to be popular now and modern Hollywood has shown it will milk popular trends dry. But while “Ender’s Game” has several elements that puts it in this category, it also does somethings that sets it apart. It is a movie with a thinly-veiled message, but it’s also a fun bit of science fiction that doesn’t always feel original but still works as a whole.

Asa Butterfield, who I loved as the wide-eyed title character in Martin Scorsese’s “Hugo”, plays a young prodigy named Andrew “Ender” Wiggin. After months of observation, he is sent to an advanced battle school by Colonel Graff (Harrison Ford). The school is the first step in preparing the kids for war with an alien species known as the Formics. 50 years earlier the Formics attacked Earth but were finally repelled by the heroic and sacrificial acts of a now iconic soldier named Mazer Rackham. The military believes another alien attack is inevitable so they plan to strike before the aliens do.

The film follows Ender and a number of other kids through various stages of Battle School. You see apparently these video game savvy youth have acquired a better skill set for the video game-like combat of the future. As Ender advances he encounters an assortment of new kids, some of which are characters we’ve seen in movies a hundred times before. For example, there is an adolescent “Top Gun” rivalry that was just too corny to buy into. All of this is going on under the watchful eye of the cold, businesslike Colonel Graff and his counterpoint Major Anderson (Viola Davis) who is more interested in the children’s emotional well-being.

The story builds and builds towards the seemingly inevitable war to come. Ender develops a few close relationships with fellow cadets including an outgoing girl named Petra. She’s played by Hailee Steinfeld, one of my favorite young actresses in Hollywood. Ben Kingsley also pops up in the second half of the film with an interesting role and a face full of tattoos. The performances from all who I’ve mentioned are solid. I’m really impressed with Butterfield and Steinfeld, both of whom know how to handle themselves in front of the camera. Some of the other young actors, not so much. 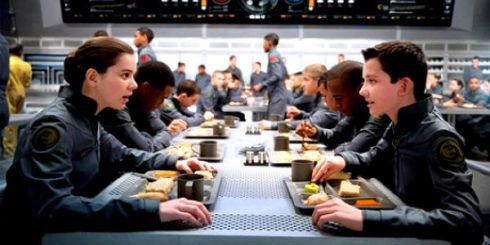 While I liked the story of “Ender’s Game” as a whole it does run into a wall about two-thirds of the way through. It begins to feel as if it is repeating itself (with slight advancements of the plot) at certain junctures. I eventually found myself ready to move past Ender’s training and get to the big finale. It certainly does come with some big special effects and a few rather disorienting twists that took a minute or two to soak in. Some interesting ramifications and personal conflicts follow which I thought was a neat way to end the story.

Maybe I shouldn’t say “end the story” because “Ender’s Game” is clearly set up with a franchise in mind. The final scene leaves no doubt about that. I would check out another chapter of this story although I’m not sure how compelling the new direction might be. As for this first installment, it is a fairly satisfying bit of science fiction that walks the tricky line of trying to appeal to youth and adults alike. For the most part it succeeds. It’s not a movie I would rush to see again, but it is a film I can appreciate.