Renowned theoretical physicist Stephen Hawking has often found himself the object of a rather unusual fascination from the entertainment industry. Beyond the number of documentaries made about his life, he also appeared in everything from “Star Trek” to “The Simpsons”. But surprisingly there hasn’t been a biographical feature length drama until James Marsh’s “The Theory of Everything”. The film offers a unique romantic perspective by putting its main focus on the relationship between Stephen and his first wife Jane Wilde Hawking.

The film is based on Jane Hawking’s book “Travelling to Infinity: My Life with Stephen”, an updated version of her previous released biography. The story begins in 1963 when a young cosmology student named Stephen (Eddie Redmayne) meets a literature student named Jane (Felicity Jones) at a Cambridge University party. The two are clearly opposites but there is an undeniable attraction between them. There relationship grows as Stephen excels in his studies of science and mathematics. He is particularly encouraged by his professor (David Thewlis) who sees the amazing potential in Stephen’s intelligence and ideas.

Redmayne and Jones have a surprisingly good chemistry which makes the relationship between their characters easy to buy into and digest. Stephen approaches Jane much like he does everything – systematically and very matter of fact. But she offers the perfect personality and balance to the unorthodox Stephen. Watching the relationship grow and flourish is the film’s most compelling dramatic component. But their affection is almost derailed after Stephen learns he has motor neuron disease. He is given two years to live and closes himself off from everyone especially Jane. But her love and determination not only keeps them together but gives Stephen the needed feeling of normalcy and the inspiration to keep fighting.

“The Theory of Everything” chronicles Hawking’s debilitating disease and the punishing toll it takes on his body and life. But it also highlighted his inspiring resilience and emphasized the unquestioned devotion of Jane. Redmayne is just superb offering several emotional levels to his character while also capturing the increasing physical impairments that end up leaving him bound to a wheelchair and unable to speak. The film is respectful in its handling of the illness and doesn’t exploit it for dramatic effect. But it’s Redmayne who makes it work by immersing himself into the character and avoiding many of the trappings that accompany this kind of role.

I was also surprised at just how much I enjoyed Felicity Jones. She’s charming, genuine, and energetic. Even more, there are times where she actually lifts up the material and makes a line of dialogue or emotional interaction work despite the occasional shortcomings of the script. James Marsh is a skilled documentarian and his work here shows that to be both an asset and a liability. This truly is a beautiful film to look at. There are a number of eye-grabbing shots and some interesting camera tricks. I particularly liked how the camera would sometimes move as if inspired by Hawking’s thorough perspective. It would scour a room or individual soaking up information much like Hawking himself. 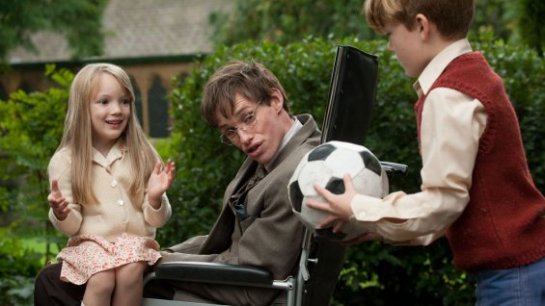 But sadly the film isn’t without its problems. It does avoid drawn out discussions of thermal dynamics and cosmology while still representing Hawking’s scientific specialty. But there were moments where the science felt shoehorned in. The film also uses several common biopic devices which keeps it from being anything fresh in the crowded genre. And then there is the last 15 minutes which felt terrible rushed and seemed to cover a few random events meant to tidy everything up. It comes off feeling like the film ran out of time necessitating a quick and clunky ending.

There is still a good story to be found in “The Theory of Everything” despite its standard biopic flavor and rushed ending. In fact it has moments where it absolutely shines. But the performances are the real treat especially from Redmayne who gives us the best work of his young career. It’s hard to watch him and not be impressed with the effort and earnestness he puts into every facet of the Stephen Hawking character. For someone like myself it was a surprise performance and it is hard to argue with his Oscar nomination and win. Now let’s just hope that his “Jupiter Ascending” performance didn’t undo the recognition this film has earned him.

29 thoughts on “REVIEW: “The Theory of Everything””