Since its inception way back in 1984, the Terminator franchise has made a name for itself. The first film was an unexpected success but it was the first sequel, “Judgement Day” which arrived seven years later, that launched the series into the upper stratosphere of pop culture. “Terminator Salvation” came out in 2009 and unlike most I thought it was a fun and unique perspective on the series. The film wasn’t as profitable as normal leaving the direction of the franchise uncertain.

But fear not, now we have a fifth installment in the form of “Terminator: Genisys”. It offers up a new  story angle with a completely new set of people playing the same franchise characters. The only familiar face is Arnold Schwarzenegger who returns as the outdated but tough T-800 Terminator. While it does try to do several interesting things ultimately it rehashes too much from its predecessors and nearly all of its attempts at originality fall flat.

To be honest laying out a story introduction is easier said than done. In the future John Connor (this time played by Jason Clarke) leads a big final assault on Skynet. As victory looks certain it is discovered that Skynet has sent a T-800 back to 1984 to kill Sarah Connor (remember the first film?). John Connor sends his most trusted man Kyle Reese (this time played by Jai Courtney) back in time to protect his mother but during the process the timeline is disrupted. Basically this flubs up everything from the past movies which grants the writers a new canvas to work on.

Once Kyle arrives in 1984 he is attacked by a liquid metal T-1000 Terminator. He is rescued by a young Sarah Connor (Emilia Clarke) and her pet…err guardian Pops. Pops (Schwarzenegger) is a T-800 sent back years earlier to protect her. Follow me so far? The rest of the film features the trio setting out to destroy Skynet before it destroys humanity. Skynet is hiding under the guise of Genisys, a popular worldwide operating system nearing its global launch. Infiltrate Genisys, blow it up, save the world. But of course that is easier said than done.

The time traveling hopscotch does offer some intriguing possibilities and the tie-ins with previous films at first are pretty great. But eventually the time element grows convoluted and most of the tie-ins feel more like crutches than attempts at any meaningful continuity. The further the movie went the more disconnected I became. In the end I kept saying to myself “This doesn’t feel like a Terminator movie”. Sure it is playing in the same sandbox, but nearly everything new it offers feels generic. There are some funny moments where they capture some of the charm that first surfaced in “T2”. There just aren’t enough of them. 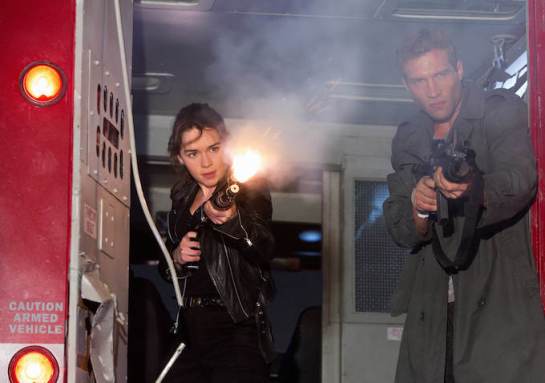 And then there is the casting. Arnie is entertaining playing the cold, dry terminator (a mirror to his usual acting ability). He is given more fun things to do than anyone else and he has a blast with it. One the other end there is Emilia Clarke who never offers up a convincing Sarah Connor. Perhaps comparing her to Linda Hamilton is grossly unfair, but she doesn’t come across as genuinely tough or tenacious. Sometimes her performance is just bad. And it doesn’t help that she and Courtney have practically no chemistry. Even Jason Clarke’s scar-faced John Connor felt a bit off.

My problems with the cast could also be due to fatigue. It could be I’m just tired of seeing the same characters constantly being portrayed by new faces. The series has often addressed this issue with age gaps. But now we have had Clarke and Christian Bale as older John Connor; Edward Furlong and Nick Stahl as younger John Connor; Courtney, Michael Biehn and Anton Yelchin as Kyle Reese; Clarke and Hamilton as Sarah, etc. It may be an unavoidable dilemma but if so it stresses the importance of casting the right people.

“Genisys” does have a couple of cool action sequences, some good laughs, and an occasional fun nostalgic nod. And on its own it does make for decent, lightweight science fiction. The problem lies in its connection to a major popular franchise. A ‘Terminator’ film brings with it certain high expectations (from some audiences) and “Genisys” doesn’t meet them. As I said, it doesn’t feel like a ‘Terminator’ movie which in the end is a pretty bad thing.