a woman seeking the right to vote through organized protest.

That definition is true yet in no way does it adequately define the women and the movement they sparked in the late 19th and early 20th century. In Great Britain the suffragette movement became a force sometimes blurring the lines between lawful and militant protesting. Militant groups such as the WSPU led by Emmeline Pankhurst went from picketing, protesting, and hunger strikes to arson and bombings. While their tactics may have sometimes crossed the line, the rights they fought for were important and deserved. It was a complex time.

“Suffragette”, the new film from director Sarah Gavron, sets itself in this period and seeks to tell the story of passionate women standing up for their right to vote. But movies like this can be tricky. When you have a wealth of rich historical source material you automatically have a story to tell. It also offers a chance to deliver a powerful message. Movies have often stumbled when trying to balance these two creative opportunities.

The story is told through predominantly fictional characters but with a few historical figures included. Instead of telling a specific historical account, writer Abi Morgan creates several characters and reveals that period through their eyes and their experiences. The always absorbing Carey Mulligan serves as our main lens. She plays Maud Watts a wife and mother who also works long, strenuous hours as a laundress.

It’s London in 1912. The suffragettes have only begun to make waves. Maud first witnesses the movement through street speakers and storefront vandalism. But her interest is mainly influenced by the inequalities she experiences at her workplace. She is also encouraged by the infectious enthusiasm of her friend Violet (Anne-Marie Duff). Maud becomes more involved as she meets inspirational women like Helena Bonham Carter’s Emily and Meryl Streep’s Emmeline Pankhurst.

Wisely, Gavron and Morgan don’t make Maud’s decisions easy. We get a compelling internal struggle and there is a constant wrestling with the potential consequences of going too far. The decisions are made even more difficult by her unsupportive husband Sonny (Ben Whishaw) and the thoughts of being separated from her young son. Add to that the dogged pursuit of the government assigned Inspector Steed (Brendan Gleeson). As the movie progresses that struggle evolves in a way that is very organic and satisfying.

The character and the struggle mainly works thanks to Mulligan. This is such an understated and subdued performance that plays in perfect sync with the character. She skillfully articulates every feeling and raw emotion. It’s no glamorous role. Mulligan sports a tired and worn face and she often expresses a convincing sense of physical and emotional exhaustion. It’s impressive watching her transition from a woman sadly content with the hand she has been dealt in life to a woman driven to action by that very same hand. It’s a fine performance. 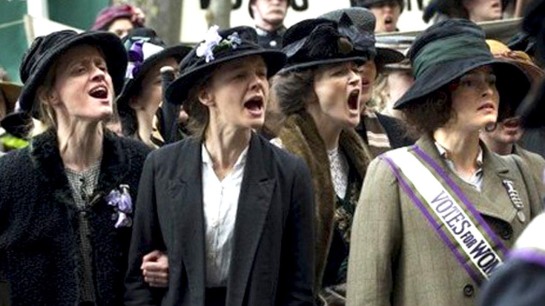 Then there is Meryl Streep. In a bit of promotional manipulation you would think Streep has a significant role. Actually she does not. It’s basically a glorified cameo. It’s almost as if they were positioning her for the obligatory Oscar nomination she gets every year (apparently no one feels “Ricki and the Flash” is going to do it for her). She’s not bad here, but there is nothing to her small appearance that stands out either.

Where “Suffragette” stumbles is in the omission department. The film looks at Maud’s life and tells her story well. But at the same time it wants to represent an important historical struggle and does so in broad strokes. Much of the struggle is thinly represented namely the motivations behind voter suppression and the political manipulation and posturing. So much in this area could have been explored. Instead we just get highlights. There is also the ending which is fine in concept but came sudden and abrupt.

“Suffragette” dances in numerous shades of gray both in the actions of the women shown in the film and in the film’s opinion about them. But it certainly doesn’t waver in its message about the plight of women during a time that wasn’t that long ago. Regardless of any hiccups, the film deals in powerful and important themes and does so in a way that can’t be ignored. There is such a great sense of time and place and falling into the life of Maud is effortless for us. It also helps to have a great performance by Carey Mulligan – one that could easily earn her a nomination come Oscar time.