Today we shift back to the ladies and focus on the Lead Actress category. To be perfectly honest 2015 belonged to the women. There were so many rich and powerful performances from a host of immensely talented actresses. These particular five are only scratching the surface of what we got over the past year. So without further adieu…

While the movie may have had flaws there wasn’t a single hiccup with Carey Mulligan’s performance in “Suffragette”. Mulligan is a fantastic actress who never gives us a false moment. In this film you see that with clarity. It’s such authentic work that lacks any semblance of glamour or show. Mulligan has a knack for portraying burdened and emotionally complex characters and the setting of “Suffragette” is ideal for her strengths.

At the beginning of the year this was not a performance I would have expected to make this list. That’s not a knock on Charlize Theron. It’s just that Mad Max movies aren’t typically known for their knockout performances. But Theron more than earns her praise for a role that essentially puts her as the film’s lead. She excels in the movie’s intense demands while also developing a female strength that goes beyond physicality. It’s hard not to invest in the amazing work Theron gives us.

Perhaps the most devastating performance of 2015 came from German actress Nina Hoss in the piercing post-Holocaust drama “Phoenix”. Hoss is asked to carry a huge emotional load with very little dialogue to work with. The result is a powerfully quiet and contained performance that tells a poignant story right up until the perfect final scene. More people need to seek out “Phoenix” and take in what Hoss brings to her thoroughly intriguing character.

One of the small gems to spring up during the 2015 movie year was Lenny Abrahamson’s “Room”. It is a powerfully moving drama and its success relies on the strength of its core mother/son relationship. Brie Larson is pivotal in making that relationship genuinely authentic. Larson maneuvers through several levels of emotional trauma never showing an ounce of insincerity and without hitting a single false not. It’s just another example of Larson showing she deserves more attention than she has gotten so far in her career. 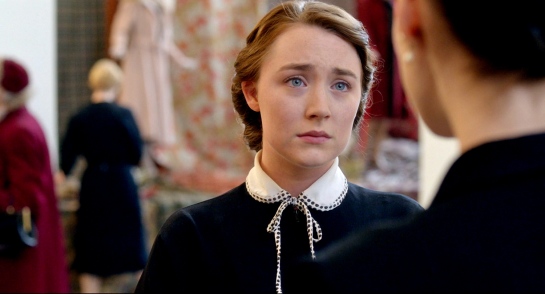 Back and forth, back and forth. That’s how I’ve been when it comes to my #1 pick. It is such a strong category but in the end I feel Saoirse Ronan deserves to be at the top of the list. “Brooklyn” was such a charming film but it also told the story of a young woman breaking free and taking the reins of her life. Ronan masterfully moves her character from shy and naive to outgoing and confident. It is such a beautiful and earnest performance. Even more stunning is that Ronan is only 21 years-old. Here she shows a maturity beyond her years and she cements herself as a true top-tier actress.

Only one more to go. Next time we dive into the lead actor category. But what about these choices? Agree or disagree? Please take time to share your thoughts and your picks below.