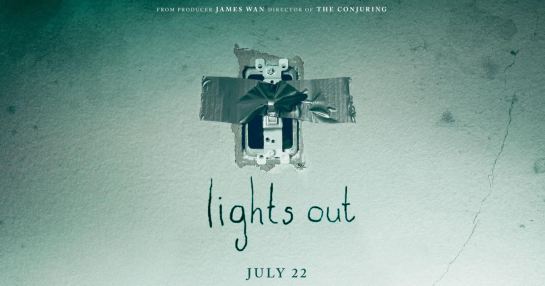 2016 has already delivered a couple of exceptional horror movies. “The Witch” and “The Conjuring 2” both offered up refreshing entries into a genre that could use a little energizing. Now we can add a third quality horror picture to the conversation – director David Sandberg’s lean, focused “Light’s Out”.

The movie is Sandberg’s feature film debut and is based on his own 3 minute short film from 2013. Here he stays centered on his subject barely stepping outside of his self-defined box. But that’s not a bad thing. It keeps “Lights Out” concentrated on its characters and on telling a good story within it’s compact 80 minute running time.

Sandberg’s film doesn’t reinvent the genre and you will quickly notice several of the usual horror movie tricks. Jump scares, creaky floors, flashlights with low batteries, temporary stupidity from the characters – it’s all here but in more measured doses. Sandberg embraces these genre devices but his film works because he is smart enough to know what is important.

So often horror movies fail because of their inability to create authentic human characters we can empathize with. “Lights Out” gets that right. At its core is a grounded story of a torn, suffering, dysfunctional family. It succeeds because the characters are given enough attention and are fleshed out through a couple of strong performances.

Teresa Palmer is really good playing a young woman named Rebecca who has been estranged from her mentally troubled mother Sophie (Maria Bello) since her father walked out years earlier. When she learns her stepbrother Martin (Gabriel Bateman) is being terrorized by something from her family’s past Rebecca is drawn back into a reluctant relationship with her mother.

The movie’s title comes from its violent creature that only appears in the dark. Light serves as the only protection and weapon which gives Sandberg a fun playground. He steers clear of CGI mostly using practical effects including true lighting and even a prosthetic suit for the creature. One reason for this may have been due to the minuscule budget, but that only makes its effectiveness more impressive.

Overall this is a tightly packaged horror thriller with a good steady pace, some decent scares, and a small interesting group of characters. Palmer and Bello are especially good and are given roles that are a fresh step above the female horror movie norm. It does employ a few all-too-familiar tricks, but they certainly don’t undercut the many things the film deserves credit for.