When examining Orson Welles’ career as a director you won’t find a huge volume of movies. What you will find is a filmmaker not only willing, but driven to experiment and explore every facet of making a movie. You see it in “Citizen Kane”, his most acclaimed film and what may be the greatest directorial debut. You see it in his superb period drama “The Magnificent Ambersons. But you may see it best in his 1958 crime noir classic “Touch of Evil”.

Originally hired for the supporting role of Police Captain Quinlan, Welles was convinced to also rewrite the screenplay and direct. The resulting “Touch of Evil” is considered by many to be one of the last great examples of film noir, featuring a fun cast, a twisting story, and a fantastic visual style.

The story is set in a Mexican/United States border town and begins with one of cinema’s greatest openings. A bomb is planted in the trunk of a car. A couple gets in the car and begins to drive through town towards the US border. Welles follows the car in one continuous three-minute shot stopping in traffic and slowly weaving through large numbers of pedestrians.

We the audience know something bad is bound to happen. We just don’t know when. Welles plays with our expectations and strings us along until the car does indeed blow. Among the nearby gathering crowd is Mexican drug enforcement officer Mike Vargas (Charlton Heston) and his new wife Susie (Janet Leigh). Vargas begins an investigation but is pushed aside by Captain Quinlan, an American police investigator who instantly butts heads with Vargas.

The film follows the investigation but it soon takes a backseat to issues of corruption, prejudice, and abuse of power. Welles’ story makes several wild and unexpected turns and the tone gets darker the further it goes. The moody camerawork embraces the visual approaches that made noir such a fascinating cinematic movement and it helps stress the edginess of Welles’ screenplay. 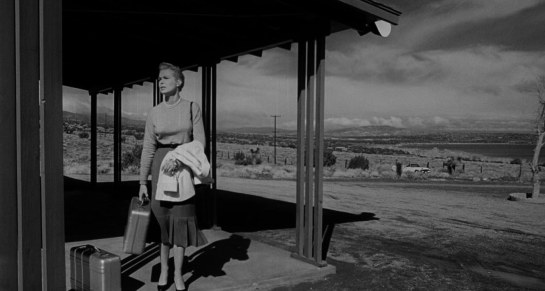 Heston was an odd choice but added star power and heft to the lead role. Leigh is very good and is featured in one of the film’s darker angles. Welles’ performance is also strong as the heavy, unpleasant Quinlan. But you have to tip your hat to the wild array of wonderful side characters who fill in this seedy, shady tale. Joseph Calleia is great as Quinlan’s right-hand man. Marlene Dietrich has a small but captivating role as a local ‘procuress’. Dennis Weaver is uncomfortably weird as a Norman Bates-like hotel night manager. Akim Tamiroff is a hoot playing a scuzzy gang boss. These characters and more pop in and out of Welles’ story and offer up some of the film’s best moments.

The original cut and unquestionably Welles purest vision for the film ended up being chopped, re-edited, and released in a 93 minute form. Over time it has been put back together as well as could be. That’s good for cinema fans because “Touch of Evil” is a movie filled with craft and vision. Its winding labyrinthine plot and deep moody visual style work together magnificently and highlight the very best film noir had to offer.