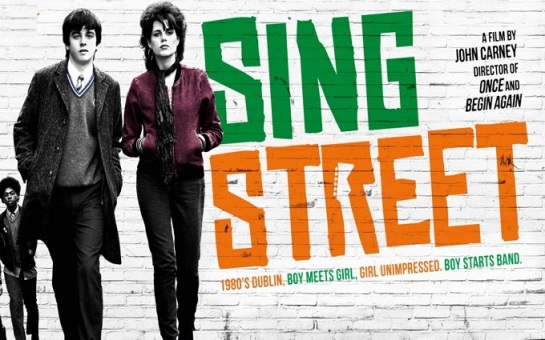 Damien Chazelle’s “La La Land” wasn’t the only delightful, endearing musical of 2016. John Carney’s “Sing Street” also celebrates the wonder of music but not in the star-studded dreamland of Los Angeles. Instead Carney plants us in inner-city Dublin circa 1985. There isn’t an ounce of glitz or pageantry in “Sing Street” yet its music, just like in “La La Land”, is packed with spirit and meaning.

Following the blueprint of his 2007 film “Once”, Carney cast musicians ahead of actors for “Sing Street”. The premise is as simple as they come – a boy forms a rock band to impress a girl. It doesn’t get much more complicated than that. But the film comes alive as Carney fills in the gaps around that simple premise. His characters brim with personality. And of course there is the music.

Leading Carney’s group of acting unknowns is Ferdia Walsh-Peelo who plays Conor, the youngest of three siblings. His family’s financial woes lead his parents (nicely played by Aiden Gillen and Maria Doyle Kennedy) to make the decision to remove Conor from his expensive private school to a free but significantly rowdier state school. As the new kid, Connor quickly finds himself the outsider among the school’s many ruffians. Constant run-ins with the class bully and the abusive principal only make things worse.

At home things aren’t much better. His parents’ marriage is falling apart and their disconnect effects the entire family. Conor’s sister Ann (Kelly Thorton) is an aspiring architect drowning in melancholy. Jack Reynor is a scene-stealer playing Conor’s older brother Brendan, a disillusioned college dropout who spends the bulk of his time listening to his records and waxing eloquently on the virtues of rock-and-roll. You could say he is Conor’s music and life professor.

Life brightens up a bit when Conor meets and instantly falls for Raphina (Lucy Boynton with a surprisingly layered performance). She’s an aspiring model who Conor convinces to star in his band’s  music video. But there’s one problem – he doesn’t have a band. So he puts together a misfit group of musicians and calls their band Sing Street. As they begin to create music it not only draws him closer to Raphina but it offers him a form of expression and an escape from the cruddy life surrounding him.

“Sing Street” is Carney’s semi-autobiographical reflection on his teen years in Dublin. He pulls a lot from personal experience which is a key reason the story and the characters feel so authentic. I would also challenge anyone who grew up on 80s music to watch this and not be giddy with excitement. There is so much eye-lined, hair-sprayed, acid-washed nostalgia. Duran Duran, A-Ha, Hall and Oates, Joe Jackson – just some of the artists we get to hear. And wait till you see Conor’s fashion choices which change with each new band he discovers.

I’m still wrestling with its ending, but for the most part “Sing Street” hits all the right notes (horrible music pun absolutely intended). Carney juggles well timed humor with deep-seated realism and surrounds both with a head-bobbing collection of classic tunes and original songs. There are good performances throughout, particularly from Boynton and Reynor, but the real surprises may be Carney’s collection of acting unknowns who make up the band. Their camaraderie is infectious and watching them create music and find fulfillment gets to the true heart of “Sing Street”. And what a big heart it is.