If you’re like me it’s tempting to dismiss this movie because of its title alone. It sounds like the straight-to-video B-movie horror that often found its home on the back shelves of those 80s video rental stores. But in truth that’s part of the craftiness at the center of “Happy Death Day” – a playfully subversive horror film that has a field day toying with familiar tropes that have defined a genre.

Writer Scott Lobdell (known for his work in comic books) pens a script that may best be described as “Groundhog Day” meets “Scream”. This wacky genre blend plays out far better than it may sound and it makes “Happy Death Day” a hard movie to pigeonhole. Case in point, Lobdell and director Christopher Landon are mainly focused on making a horror-comedy, but you could also call it college campus satire, a romcom, and even a life-affirming morality tale. It’s far from revolutionary, but there is much more to this movie than you would expect.

Jessica Rothe plays the snooty and loose-living ‘mean girl’ Theresa “Tree” Gelbman who wakes up in the unfamiliar dorm room of sweet, unassuming ‘nice guy’ Carter (Israel Broussard). Unable to remember anything from her previous night of partying, Tree storms out and begins her normal routine of berating or belittling the people in her life. But her day doesn’t have a happy ending. On her way to a party she is stalked and murdered by a killer in a black hoodie and a baby mask.

Now enter the “Groundhog Day” conceit. The moment of her death she suddenly wakes up in Carter’s room yet again. She’s met with the same response from him and everyone else she encounters. She quickly realizes she is replaying the same day. This happens again and again, with her dying at the end of each day regardless of her efforts to avoid it.

At a point during this time loop we see a transformation take place both in the story and in Tree. She turns from novice scream queen to super sleuth and the film becomes more of a murder mystery as she works to reveal her own killer. The list of suspects is long, filled with people Tree has mistreated or offended. She focuses each replayed day on a new potential suspect and as she goes down her list she begins to learn some not so flattering things about herself. 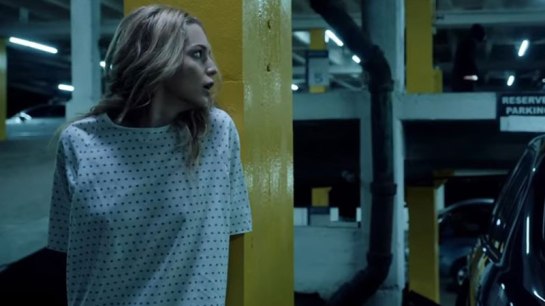 Rothe (perhaps best known for her bit part as one of Emma Stone’s roommates in “La La Land”) may be the biggest reason to see this film. I’m pretty sure she is in every single scene and it’s not the easiest role to tackle. She’s asked to stretch herself out in several different directions. Perhaps the most surprising element to her performance is her sharp comedic chops. I can see this opening up some new doors for Rothe.

While the script is clever and the performances are good, I don’t want to oversell “Happy Death Day” or leave the impression that it is some kind of seminal groundbreaker for the horror genre. It definitely utilizes some of the same tropes it pokes fun at and the whole thing is unquestionably silly. But the tongue-in-cheek approach by the filmmakers and their willingness to laugh at themselves makes this a better experience than the title would have you believe.