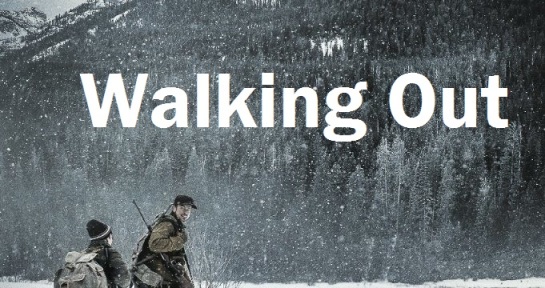 “How was your year”? It’s the first question Cal has for David his teenaged son who just flew in for a winter hunting trip. It’s the first of many signs revealing a disconnect between father and son who rarely see each other following Cal’s divorce from David’s mother. David lives with her in Texas. Cal lives in a secluded cabin in the mountains of Montana.

Twin brothers Alex and Andrew Smith directed and wrote the screenplay for “Walking Out”, an adapatation of a David Quammen short story. You could say it is a poignant family drama masquerading as a survival thriller. This story of a hunting trip gone bad certainly has all the elements tense survival tale. But even during those moments it’s the unfolding family dynamic that gives it all such meaning. 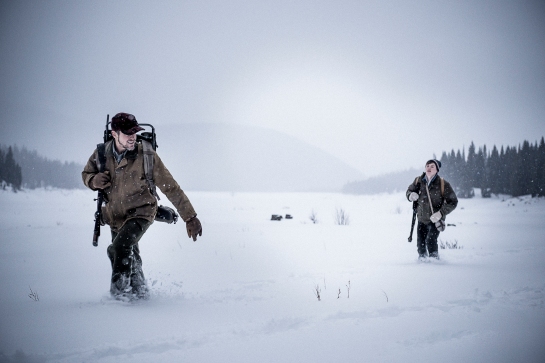 Cal is played by Matt Bomer, an unexpectedly nice fit. There’s a lot we aren’t told about Cal. Why does he live like a hermit? What does he do for a living? Why did he and David’s mom divorce? What little bit we know is picked out of conversations with David and occasional flashbacks to when Cal hunted with his dad (played by Bill Pullman).

David is wonderfully played by Josh Wiggins. It’s such a genuine performance and a genuine character. David would much rather play on his cell phone than trod through the snowy wilderness. He’s a kid any viewer could recognize – awkward and a bit aloof. He is certainly out of his element in Montana. But at the same time he wants to be please his father and be close to him.

The chemistry between Bomer and Wiggins is a big reason this film works. For nearly half of the film the two make their way to the remote hunting grounds high up in the mountains. During this time we see both the compassion and contention that defines their relationship. But when the inevitable happens and something goes terribly wrong we see a necessary evolution of their relationship. 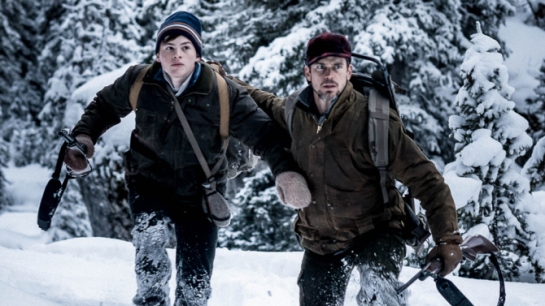 “Walking Out” offers an interesting exploration of the father/son dynamic. For example it plays with the idea of sons becoming their father. We see it in how during the hunt Cal assumes the role of his father (who we see during the flashback sequences). And after the incident we see David doing something similar and becoming more like his father. This is one of several themes the Smith brothers play around with. There’s nothing deeply profound, but interesting nonetheless.

The film’s title makes the impending peril obvious, but the buildup of the two main characters and their strained relationship gives form to the danger once it hits. The mountainous wilderness is shot in a way that makes it both menacing and breathtaking. The further they get from civilization the more beautiful and treacherous the land becomes. It becomes a powerful supporting character and a perfect setting for this modest yet satisfying picture.

5 thoughts on “REVIEW: “Walking Out””