I feel the need to start off with a confession. After seeing the first trailer for DC’s “Shazam!” I pounced on the opportunity to voice my skepticism. It wasn’t due to a desire to be some kind of contrarian. I genuinely disliked DC’s decision to make a joke out of a truly iconic character. You could say I was armed and ready to push back hard on this movie.

Funny thing though, despite my prefabricated negativity, it was hard to hate on the trailer too much. It’s star Zachary Levi is a genuinely likable guy and it did sport some humorous ‘reluctant superhero’ moments. I kept thinking of Will Smith’s “Hancock” except actually funny. But enough about the trailer. What about the actual movie itself? Let’s say it lands somewhere in the middle. 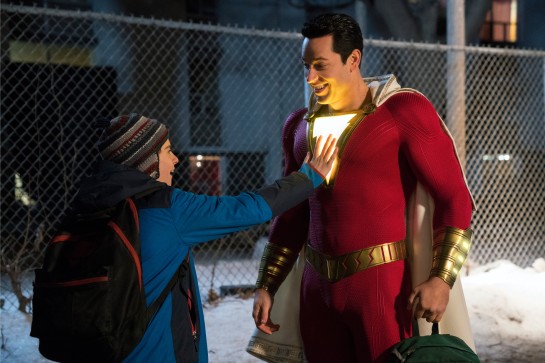 “Shazam!” is the seventh film in the DC Extended Universe and easily the most light-hearted of the bunch. The heads at DC Films seem to have panicked and pivoted to making their movies much more MCU-like instead of carving out a their own unique identity. I actually appreciated their darker and more serious tone as it offered a different flavor to the superhero genre.

David Sandberg, known more for his work in horror, directs from a screenplay written by Henry Gayden. He opens with a prologue featuring Djimon Hounsou as a wizard decked in full Gandalf the Grey garb. He basically serves as a crash course on the Shazam lore you’ll need for the two-plus hours that follow. We get things like the Rock of Eternity, the Eye of Envy, the Seven Deadly Sins each in monster form. You know, the normal stuff.

Now jump ahead to present day Philadelphia where teenaged Billy Batson (Asher Angel) has ran away from one foster family after another. Child services gives him one more chance, putting him in a group home ran by Victor and Rosa Vazquez (sweetly played by Cooper Andrews and Marta Milans). But Billy has no interest in a new family. Instead he’s intent on finding his birth mother who he was separated from as a child.

The house is made up of a fairly interesting array of characters. None are particularly deep but they serve their purposes. His gabby, superhero enthusiast roommate Freddy (Jack Dylan Grazer) gets most of the scenes. He’s a little annoying but proves to be a big help after Billy magically encounters the wizard from the prologue who imbues him superhuman powers in the form of a super-buff adult body (played by Zachary Levi). It’s Freddy who helps him sort through his crazy new abilities.

But every hero needs a villain, right? Mark Strong can make the silliest material seem menacing and here he plays Thaddeus Sivana, a power-hungry baddie with serious daddy issues. In the prologue we see him encountering the aforementioned wizard as a child. But he was deemed unworthy of the power Billy now possesses and has been seeking the way back to the wizard’s realm ever since. And once he gets wind of Billy, well he begins doing bad guy things.

While Strong’s performance is fun, as villains go the movie version of Sivana is pretty shallow. Instead of giving him any meaningful depth Sandberg digs his heels into the comedy element of his story. It turns out to be a double-edged sword. Some of the film’s most playful moments are its best. Take when Shazam/Billy and Freddy are going through their checklist of superpowers testing every one. And much of it too the smile-inducing “Don’t Stop Me Now” by Queen. 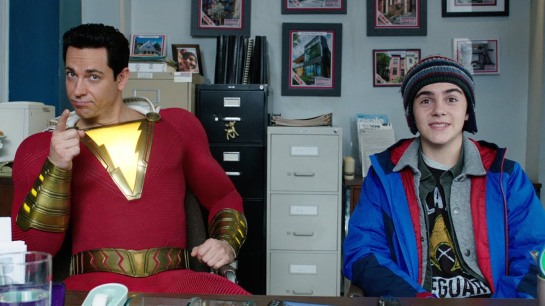 But eventually the whole ‘kid in an adult body’ wears a little thin. And when so much time is put into youthful frolicking, it’s hard to buy into his sudden shift to superhero. Not to mention the tonal clashes particularly as the movie transitions back-and-forth between Billy’s angle and Sivana’s. It’s tough to balance Shazam flossing (that’s a dance for you older folk) with a demon creature chomping someone’s head off.

There is no denying that “Shazam!” has charm and heart. You also can’t help but enjoy the fun and energetic Zachary Levi, padded suit and all. Yet I can’t shake the feeling that the original Captain Marvel (sorry MCU, it’s true) deserved a better movie. A part of me thinks “Shazam!” would work better as an all-out spoof instead of attempting a balancing act. Then again I would probably push back on that even harder. So we are left with a fun but lightweight DC installment that uses a ton of humor to mask its otherwise noticeable flaws.