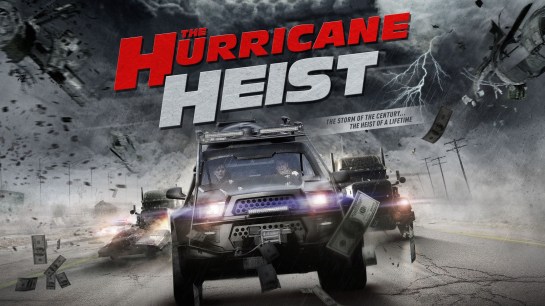 Let’s be honest, with some movies you kind of know what you’re going to get just by the title alone. Okay, some more than others, but you get my point, right? Take the action-disaster mash-up “The Hurricane Heist”. Its hysterically literal title assures us of what we are in for – 100 minutes of category five absurdity. The question is how far can you go with it?

Toby Kebbell and his hilariously over-stressed Southern drawl plays Will Rutledge, a government meteorologist in Alabama keeping tabs on the mother of all hurricanes approaching the Gulf Coast. His relationship with his brother Breeze (Ryan Kwanten) has been strained since 1992 when they lost their father to Hurricane Andrew (see the prologue).

Breeze is a mechanic who has stayed in their hometown of Gulfport to run the family’s towing business. He has a repair contract with a U.S. Treasury facility – the same facility a group of hoodlums are planning to knock off. And boy is their scheme an elaborate one full of carefully planned double-crosses, infiltration, computer hacking, and of course one made-to-order hurricane. What they didn’t factor in was dedicated Treasury agent Casey Corbyn (Maggie Grace) who quickly becomes a thorn in the bad guys’ side.

As the hurricane bears down, Breeze ends up in the treasury facility while Will and Casey are on the outside working together to thwart the heist. But to be honest none of that really matters. By this point the story is so silly and inconsequential, functioning mostly to move from one weather-action scene to the next. Admittedly I did get a kick out of some of the set piece antics. Whether I took them the way intended by the filmmakers, I don’t know. But they are just goofy enough to keep things mildly entertaining.

The film is directed by “Fast and Furious” creator Rob Cohen but don’t expect “The Hurricane Heist” to follow in that franchise’s footsteps. It bombed at the box office, unable to make back its semi-meager $35 million budget. Despite that there is some ridiculous fun to be found if your head is in the right place. This isn’t an offensively bad movie (it’s no “Geostorm”). Then again, that’s not much of a bar.

16 thoughts on “REVIEW: “The Hurricane Heist””