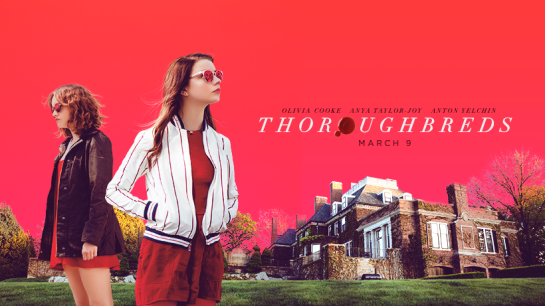 Two teenaged friends reunite in Cory Finley’s intriguing debut feature “Thoroughbreds”. As many of us can attest to, even the closest childhood friendships are like a vapor with no guarantees to last. But sometimes, even unexpectedly, old friendships can be rekindled. Such is the case for the film’s two upper-class Connecticut teens Amanda and Lily.

Serving as both writer and director, Finley originally penned “Thoroughbreds” as a stageplay. You can see elements of those roots throughout the film – the emphasis on language, the framing of certain shots, holding them a few seconds longer that normal. It works well within the framework of this unusual thriller/black comedy which has drawn comparisons to “American Psycho” and the even the iciest Hitchcock.

Olivia Cooke (“Me and Earl and the Dying Girl”, “Ready Player One”) plays the eccentric and seemingly emotionless Amanda. She’s been through the rounds with psychiatrists after an animal cruelty charge and now her mother feels she needs more interaction with her peers. Mom secretly hires Amanda’s one-time childhood friend Lily (Anya Taylor-Joy of “The Witch” and “Split”) to hang out and be her tutor. Lily is perceived to be the “normal one” of the two – smart and popular with the ‘in’ crowd at school.

Normally a social flower and a pariah aren’t the most compatible pair, but as Amanda and Lily spend more time together their psychological bond becomes more evident. A key turning point in their friendship centers around Lily’s cold, abrasive stepfather (Paul Sparks). Lily detests him, Amanda flippantly recommends killing him, Lily scoffs at the idea. But is Amanda really serious? What happens when Lily has second thoughts? From there the story moves forward in full blue-blooded psychological thriller mode

While both Cooke and Taylor-Joy are interesting and expressive young actresses who truly nail down their characters, Anton Yelchin shines the brightest. It’s a small role but possibly the most genuine and sympathetic. He also gives us a breather from the film’s effective yet steadily acidic tone. Yelchin plays Tim, a low-level drug pusher with big aspirations. He’s as naive as he is pathetic which makes him the perfect stooge for the girl’s on again/off again master plan.

Despite dancing close the line of genre predictability, “Thoroughbreds” never crosses it and it has enough originality to feel uncomfortably fresh. The sound design, the visual style, its obvious noir roots – it all plays together nicely. The result is a half-batty movie that takes the problems of the young and privileged and gives them a violent shake. Where do all the pieces land? You’ll have to watch to find out.