Who knew back in 2001 that “The Fast and the Furious” would not only spark its own franchise but that it would spawn seven sequels (so far) and collectively make well over $5 billion (again so far). And considering how often they churn out installments did the really need to branch off into spinoff territory?

The current Hollywood model for franchises says “YES”. So that leads to the first Fast and Furious Presents film “Hobbs and Shaw”. For those of you out of the loop, Luke Hobbs (the beefy Dwayne Johnson) is a federal agent who gets the job done and leaves a trail of mass destruction in the process. Deckard Shaw (the more dapper Jason Statham) is special forces-turned-mercenary with a strong dislike for Hobbs.

What if something happened that forced these two meat-headed tough guys to put aside their differences and team up? That’s the stuff of a good spinoff, right? Well that something comes in the form of the Snowflake virus. You know the drill – a deadly virus that if released would quickly spread and wipe out the earth’s population (why do these scientists just keep inventing these things?). 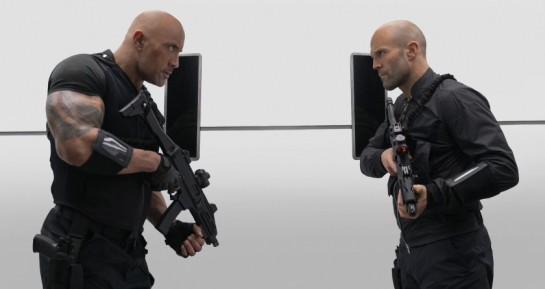 Enter the movie’s wildcard (and welcomed new ingredient) Vanessa Kirby. She plays Hattie Shaw (that last name ring a bell?). She’s an MI6 agent who retrieves the virus from some meanies before running into their boss Brixton Lore (a really fun Idris Elba). He’s a cybernetic-enhanced terrorist working for the shadowy outfit Eteon. Hattie escapes by the skin of her teeth which prompts Lore to frame her for the killing of her team and theft of the virus.

Hattie goes off the grid while Hobbs and Shaw are brought in to track her down. And all three are being hunted by Lore and his high-tech band of baddies. If you’ve seen any of the more recent Fast & Furious movies you know the blueprint of this one – humongous action set pieces linked together by small segments of story. To the film’s credit, it does offer a nice slice of pathos in the final act built upon the franchise’s long-running theme of family.

One of the biggest reasons these movies have worked is because they know exactly what they are. I think “Hobbs and Shaw” may be the most self-aware F&F movie yet. It’s constantly riffing on itself and especially its two lead characters. Much of this is done through the snappy comedic chemistry between the slab of granite Johnson and the more buttoned-up Statham. Their constant witty banter pokes fun not only at their characters but also the roles these actors often play. And both guys have more than enough charm and charisma to pull it off. 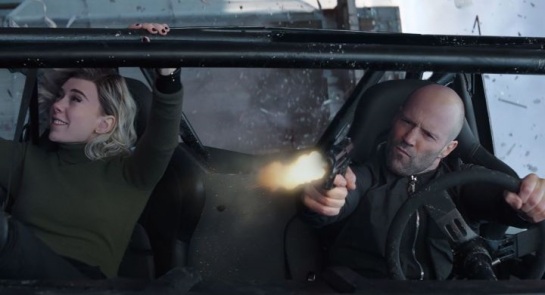 But again, the testosterone-driven action and humor could have worn out its welcome if not for the movie’s ace in the hole – Vanessa Kirby. In last year’s “Mission: Impossible – Fallout” she grabbed our attention with her seductive and mysterious presence. We still get some of that, but this role gives her a lot more to do. Her character is always smarter and in many instances tougher than any of the barking alpha males she shares a screen with.

And of course there is the action, the franchise’s true bread and butter. There is no shortage of it in “Hobbs and Shaw” and it’s often as exhilarating as it is preposterous. Director David Leitch showed his action movie chops with his 2014 debut “John Wick”. Some of that style seeps its way into this film particularly in the hand-to-hand fighting. But it’s the crazy over-the-top set pieces (often involving vehicles) that are the most fun. It’s just a shame that so many of the signature action moments were given away in the trailer.

In a nutshell, “Hobbs and Shaw” is exactly what you should expect it to be – funny, violent, predictable and utterly preposterous. But if it were anything else I would have been disappointed. It’s essentially a story of two frenemies who go about things differently but who are cut from the same cloth. Now add a ton of wit, even more eye-popping action, a fun Idris Elba, and a fabulous Vanessa Kirby and you have a summer blockbuster that’s just begging to be your new guilty pleasure.

21 thoughts on “REVIEW: “The Fast and Furious Presents: Hobbs and Shaw””