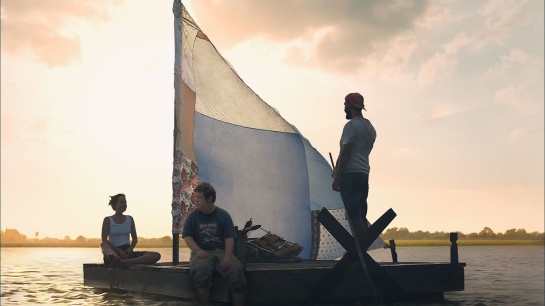 This is one of those cases where a movie had me with the trailer. Despite the question marks of Shia LaBeouf and Dakota Johnson or the potential for sappy and overwrought sentimentality, there was something about the way “The Peanut Butter Falcon” presented itself that instantly grabbed me. Oh, and the name is pretty catchy too.

From the very start “The Peanut Butter Falcon” plays like a Mark Twain story for modern day audiences. It’s the feature film debut for co-writers and co-directors Tyler Nilson and Michael Schwartz. Friends and collaborators for over ten years, Nilson and Schwartz show off a wonderful sense for their Outer Banks, North Carolina setting and for the characters who live there. It’s easy to lose yourself in their convincing slice of Deep South Americana.

At its core this is a movie about three lost souls each bound by their own circumstances. Shia LaBeouf is excellent playing Tyler, a struggling crabber who gets in deep with another local fisherman (a perfectly cast but underused John Hawkes). Zak (a beguiling Zack Gottsagen) is a 22-year-old with Down Syndrome who is stuck living in a nursing home for the elderly. His dream is to attend the pro wrestling school of his hero Salt Water Redneck. Dakota Johnson plays Eleanor, Zak’s caseworker and friend. She genuinely cares for him and he’s the one meaningful relationship in her life.

With the help of his rascally roommate (Bruce Dern), Zak busts out of the nursing home and he crosses paths with Tyler who is trying to get away from Hawkes’ Duncan. With both of them on the lamb (so to speak) the two form an unexpected and poignant bond. Tyler agrees to take Zak to Salt Water Redneck’s wrestling school and their Huck Finn-inspired journey begins. In the meantime Eleanor is following their trail but unsure of what to do when and if she finds them.

Along the way they meet a fun array of southern-fried locals and each encounter strengthens the relationships Tyler, Zak, and Eleanor share. And as the movie progresses Nilson and Schwartz show off two clear strengths – the ability to authentically capture the rural South and a true feel for fleshing out their characters. There is an undeniable sweetness at the center of this truly heartfelt story. But it only works because we care for the characters and believe their plights.

The performances are just as important. LaBeouf is the real standout here. He is deeply committed to his character and has clearly done his homework. The Tyler he gives us could have been plucked right out of North Carolina’s barrier islands. And what delightful work from Zack Gottsagen, a real-life Down syndrome young adult. As an aspiring actor, Nilson and Schwartz had promised Gottsagen they would write a movie for him and he pays back their efforts with a performance full of enthusiasm, humor, and moxie. Johnson isn’t given as much to do yet she’s a nice fit within the trio.

“The Peanut Butter Falcon” is a tender and often funny heartwarmer with loads of charm, personality, and humanity. A career best turn from Shia LaBeouf and an endearing debut from Zack Gottsagen certainly doesn’t hurt. It all makes for an utterly charming tale of friendship that feels pulled off the page of a storybook yet still very much etched in the real world. I really fell for it.