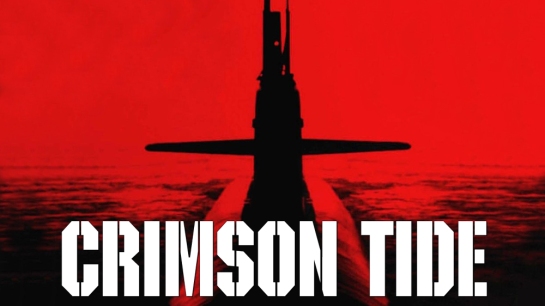 Over a span of three months each Wednesday will be Denzel Day at Keith & the Movies. This silly little bit of ceremony offers me a chance to celebrate the movies of a truly great modern day actor – Denzel Washington.

Submarine thrillers are a special brand of war movie. Because of their isolated locations and confined spaces, the bulk of their focus is on the interpersonal drama between characters. Perhaps that’s one reason there aren’t very many of them. And of those out there, the ones that do get the character-driven drama right are the ones that stand out from the others. “Crimson Tide” gets it right.

Tony Scott directed this tense undersea thriller that is surprisingly intimate despite having all of the big budget trimmings. Both Michael Schiffer’s snappy script and the strong supporting cast (particularly Viggo Mortensen, George Dzundza, and James Gandofini) are dressing for the charisma and fierce screen presence of the movie’s two leads – Denzel Washington and Gene Hackman.

The United States submarine USS Alabama is sent to the region armed with nuclear missiles to either be a deterrent to a Radchenko attack or to wage a pre-emptive strike which would certainly lead to all-out nuclear war. Hackman plays the vessel’s Commanding Officer Captain Frank Ramsey. He’s a hard-nosed leader who has been commanding ships for over twenty years. Washington plays Ramsey’s new Executive Officer, Lieutenant Commander Ron Hunter. He comes highly regarded from the Naval Academy and even has a year at Harvard, but no military experience.

These two big personalities begin to clash, at first over small things such as philosophies and by-the-book protocols. But when tensions in the region escalate and the ship is ordered to DEFCON 3, their dramatically different approaches in the face of potential nuclear war could determine the fate of billions. Their main beef is over two emergency action messages from Washington. The first orders the vessel to launch missiles at a Russian nuclear site. The second message is cut off before it can be fully transmitted.

With communications down Hunter pushes to be prudent and cautious until the second message can be retrieved. Ramsey is more headstrong and impulsive, choosing to follow the orders of the first message while disregarding the second. Assertions of aggression, insubordination, and mutiny splits the crew and raises the story’s dramatic tension. It sets up the film’s biggest conflict as emotionally charged, high stakes back-and-forths between CO and XO stand in for the normal big action set pieces.

Once we enter the submarine we never leave until the very last scene. During our time underwater we run into several familiar tropes: water bursting into a lower decks, crew members running down tight corridors, a fire in the galley. Those things are nothing new. But it’s Washington and Hackman as the film’s centerpieces who drive the story. Their performances are (as you would expect) top-notch and the screenplay gives them several big moments.

Neither Scott nor Schiffer seem worried about the deeper details of the crisis or the geopolitics at its center. That’s a good thing as it keeps the narrative tighter and more focused. It also enables the film to be exactly what it wants to be. “Crimson Tide” doesn’t aim to be some deeply psychological or politically charged story. It’s very straightforward mainstream entertainment with two dynamic box office leads and solid supporting work. That’s more than enough for me.