Over a span of three months each Wednesday will be Denzel Day at Keith & the Movies. This silly little bit of ceremony offers me a chance to celebrate the movies of a truly great modern day actor – Denzel Washington.

“The Bone Collector” is without a doubt one of the oddest films in Denzel Washington’s filmography. Not because of anything it does intentionally. But because of its peculiar mixture of intriguing premise, conventional genre beats, great performances, and certain story angles too preposterous to fully digest.

Based on Jeffery Deaver’s 1997 novel, “The Bone Collector” is a crime thriller that has a lot of things going for it. It starts with the cast, specifically Denzel Washington. He plays Lincoln Rhyme, a brilliant NYPD forensics expert who is left paralyzed after an accident at an active crime scene. Four years pass and a depressed Lincoln is bed-ridden in his New York apartment and dependent upon his loyal around-the-clock nurse Thelma (played by Queen Latifah). 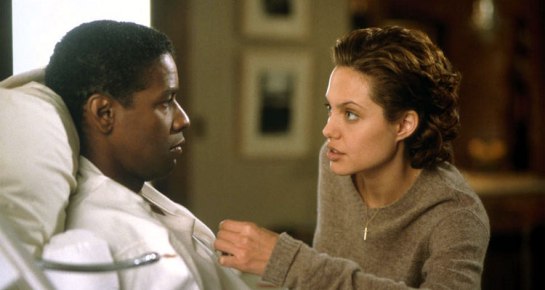 Unhappy with his quality of life, Lincoln tries to convince a doctor friend to help him end his life. But he regains a spark for life after a police colleague (Ed O’Neill) seeks his help in profiling a murder. A beat cop named Amelia Donaghy (Angelina Jolie) was the first officer on the scene and discovered the carefully staged murder. Lincoln is instantly drawn to her instincts and demands she helps on the case if he is to help them find the killer.

Here’s the first instance of things getting a little goofy. The NYPD sets up shop in Lincoln’s Manhattan apartment, complete with high-tech forensic gear, laboratory equipment and an entire task force to man it all. Who knew it was so easy? The only stick-in-the-mud is Michael Rooker’s character. He plays your prototypical contrarian police captain who is either on an ego trip or has an axe to grind. We never really know because his motives are as clear as a glass of muddy water.

Director Phillip Noyce (who also made the highly acclaimed thriller “Dead Calm”) moves things along at an odd pace. It’s so lethargic that I began to wonder if it was some kind of subversive style choice. But you quickly realize it’s just a slow-moving, by-the-books whodunit where a killer comes up with creative and grisly ways of killing his victims while leaving clues for the heroes to piece together. Pretty familiar stuff.

All of that is really a shame because (again) the performances from top to bottom are really good. Both Washington and Jolie really elevate the material and make their characters interesting. But they need more depth, especially Jolie’s Amelia who came across as more of a sketch than fully fleshed out. O’Neill, Queen Latifah, and Luis Guzman each offer good supporting turns.

Ultimately “The Bone Collector” ends up squandering it’s interesting premise and strong casting. It’s never boring and I always enjoy watching great performers do their thing. But the film is lined with too much silliness, too many contrivances, and a lack of originality that keeps it from setting itself apart from the many other thrillers of its kind which were so popular at the time.