Louisa May Alcott’s original two-volume classic “Little Women” has been adapted multiple times for stage and television as a drama, a musical, and even an animated series. When it comes to the big screen the story of the four March sisters has been adapted a total of eight times over the last 100 years starting with a 1917 silent version all the way to Greta Gerwig’s 2019 refresh.

Gerwig writes and directs this coming-of-age family drama that has all the energy, personality and period appeal you would expect from Alcott’s story. She fills her movie with an absolutely stellar cast while also working with some fabulous talent behind the camera. French cinematographer Yorick Le Saux, production designer Jess Gonchor, the brilliant composer Alexandre Desplat, and Oscar-winning costume designer Jacqueline Durran all work with Gerwig to create a vibrant, lived-in 1860’s New England.

As lovers of the story know, the film follows the March sisters growing up outside of Concord, Massachusetts. Jo (Saoirse Ronan) is the principle character, a fiery free-spirit known for her stubbornness. Meg (Emma Watson) is the oldest and most level-headed sister. Amy (Florence Pugh) is an immensely talented painter, brutally honest and bratty but with a pinch of humor. Beth (Eliza Scanlen) is gentle, unassuming and a remarkably good piano player.

The relationships between the sisters are spirited, playful, sometimes competitive but always loving. Gerwig nicely taps into each girl’s unique individuality, highlighting their strengths and flaws. Most importantly none of the girls ever get lost in the shuffle or feel shortchanged. Gerwig’s affection for Alcott’s novel and more importantly these characters is clearly seen in ever frame. And while Jo may be the film’s lead, Gerwig treats all the sisters as equals.

It helps to have such sparkling chemistry between actresses. Ronan (so good in Gerwig’s previous film “Lady Bird”) leads the way, capturing every ounce of Jo’s blazing independence and creative ambition. She’s a veritable whirlwind of attitude, determination, and feminine grit. Watson gets her best role in years and Scanlen exudes earnestness with every tender glance. But it’s Pugh who could be the standout. Her management of Amy’s many layers is superb and she clearly understands her character who goes from vindictive snoot to a sure-footed pragmatist who understands what it means to be a woman in 1860’s America. Pugh is nothing short of brilliant.

And I have to mention the supporting cast who fill out Gerwig’s world yet never feel like filler. Most obvious is Timothée Chalamet who plays Laurie, the wealthy boy next door who becomes a fixture among the March girls. He’s charming but impulsive and often flies by the seat of his pants. Laura Dern is fabulous as the girl’s saintly mother Marmee and Meryl Streep pops up as their sickly looking curmudgeon of an aunt. And a muttonchopped Tracy Letts is a hoot playing a patronizing publisher who epitomizes the era’s archaic societal rules for women. At one point he tells Jo to make her stories “short and spicy. And if the main character is a girl make sure she’s married by the end.” 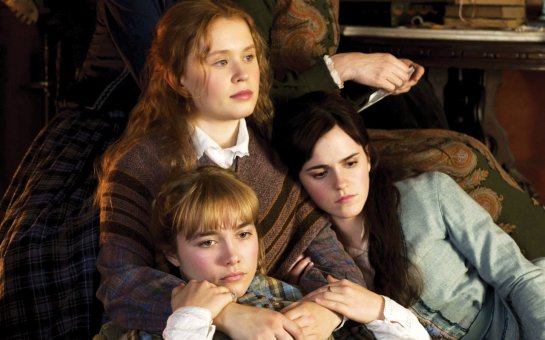 Throughout “Little Women” we see numerous touches that highlights the modern day relevance of the story. Alcott’s book always had a forward-thinking bend and you can tell it left an impression on Gerwig. The biggest divergence from the book is in the non-linear storytelling. Gerwig’s script bounces between two timelines set seven years apart. One of my lone complaints is that picking up on the time jumps can be a challenge at least until you get in sync with it. But it does allow Gerwig to do some really interesting things with the narrative such as shifting emphasis and shedding new lights on certain characters.

As a “Little Women” novice I can’t speak to how Greta Gerwig’s version measures up to other adaptations. I can’t pick out every difference from Alcott’s classic. But I do know this is a truly great movie filled with an effervescent female spirit that celebrates the joy of family and the unbreakable bond of sisterhood. Gerwig directs with such vision and confidence and her script takes an all-time classic story and makes it feel fresh and new. The film also features a magnificent ensemble cast. Put it all together and you have one of the true delights of 2019.