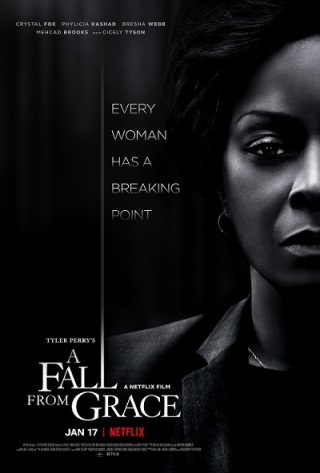 “Not everyone deserves grace“. Apparently that includes the audience. Actually those dual-meaning words slide across the screen in the trailer for Tyler Perry’s latest thriller that just debuted on Netflix. “A Fall from Grace”, front-ended with Perry’s familiar brand tag, marks the twentieth film where the entertainment heavyweight has served as writer, director, and producer. And it’s yet another film of his that would feel right at home on a Tyler Perry version of the Hallmark Channel. But to be honest, even Hallmark would send the film back to him for much needed re-shoots.

I don’t want to be too harsh because there is a lot to admire about Perry and his contributions to a community he clearly cares for. He works tirelessly and pours in a ton of his own resources and efforts to create opportunities in areas that sorely lack them. Those are all great qualities despite what Spike Lee says. I just wish Perry’s movies were better.

For what it’s worth, “A Fall from Grace” is never boring and it navigates its often shaky material on the back on one particularly strong performance from Crystal Fox. She plays Grace Waters who is set to go on trial for the murder of her younger husband Shannon (Mehcad Brooks). A freshly minted attorney named Jasmine Bryant (Bresha Webb) works for the Public Defender’s office and is assigned Grace’s case by her indifferent boss Rory (Perry). It seems pretty cut-and-dried. Grace wants to plead guilty, Jasmine is to manage the plea deal, case closed.

But Jasmine is encouraged to dig a little deeper much to the chagrin of her grumpy boss. She learns from Grace’s best friend (Phylicia Rashad) that she was a Sunday School teacher, sang in her church choir, and baked cookies for the neighborhood children. She urges Grace to share her story and through their conversations (and a series of flashbacks) were learn about what put her prison. We learn Grace, divorced and lonely, was swept off her feet by the young hipster Shannon. But all was not what it seemed and the scamming Casanova made Grace’s life a veritable hell.

I’ll leave the story there but suffice it to say Grace is convinced to let Jasmine fight for her which leads to a final act courtroom drama that is mind-blowing but not in a good way. The later court scenes not only look stunningly cheap but play out like the whole thing is on a time clock. Not to mention it features some of the most astonishingly bad lawyering I have ever seen in a movie or on TV. Watching half a season of Law and Order would have led to a better case than Jasmine presented.

In fairness the movie was shot over the course of five days and unfortunately you can tell. So many scenes desperately need more attention and certain overlooked details stick out like a sore thumb. And boy has the internet been quick to point them out. Take the much talked about bad wigs which sometimes take wildly different forms within the very same scene. And then there is a diner scene where extras sitting in the background stare directly into the camera, drink water from empty glasses, and eat invisible food. I’m not making this stuff up.

I hate to be so hard on “A Fall from Grace” because my wife and I actually got a kick out of watching it together. The problem is much of our enjoyment came at the film’s expense. The cast gives it their all and you have to applaud them for working hard with some pretty bad material. But the story is riddled with head-scratching moments and I haven’t even talked about the ludicrous ending. Add in the production value which highlights the low budget rather than overcomes it and you have a movie that doesn’t exactly herald Tyler Perry’s arrival to Netflix.