It was November 19, 1863 that Abraham Lincoln delivered his Gettysburg Address which contained the words “from these honored dead we take increased devotion to that cause which they gave the last full measure of devotion – that we here highly resolve that these dead shall not have died in vain.” Lincoln’s mention of the ultimate sacrifice inspired the title for Todd Robinson’s war drama/conspiracy thriller “The Last Full Measure”.

The movie tells the story of United States Air Force Pararescueman William H. Pitsenbarger. During the Vietnam War, Pitsenbarger (nicknamed Pits) completed over 250 rescue missions. On April 11, 1966 the 21-year-old Pits lowered himself down from his medical chopper to treat wounded in the middle of an intense ambush. Instead of returning to the helicopter he stayed behind, rescuing as many as sixty soldiers before dying by a sniper bullet. Despite his incredible heroics, it shamefully took three decades for him to get the much-deserved Medal of Honor.

Robinson tells this moving story by focusing on the quest to get Pits a posthumous Medal of Honor while weaving in flashbacks to the battle in Vietnam that ultimately cost him his life. The movie’s convictions are clear, maybe too clear for some. At the same time, it all comes together to provide a healthy reminder of how often we forget the heroes who sacrificed and their families still trying to pick up the pieces. Add a thick layer of bureaucracy and  it only gets worse.

The bulk of the story takes place in 1999 where a fast-rising Pentagon hotshot named Scott Huffman (Sebastian Stan) is given Pitsenbarger’s case after the soldier’s parents (a stellar Christopher Plummer and Diane Ladd) once again petition for their son to receive the Medal of Honor. Scott couldn’t care less and is already looking towards his next job opportunity. But as he begins interviewing those who witnessed Pits’ bravery firsthand (William Hurt, Samuel L. Jackson, Peter Fonda, Ed Harris) he begins seeing things in a different light.

The movie has quite a lot going on. The most potent moments come during the interviews where the scars of the war veterans are laid bare. Feelings of guilt, depression, nightmares and even worse symptoms of PTSD are examined. And with names like Hurt, Jackson, Fonda, and Harris you know the performances are there. The flashback battle scenes are told from their individual perspectives. They’re intense, effective and generally well shot.

The government conspiracy stuff doesn’t work quite as well. As Scott cuts his way through the cover-up and bureaucratic red tape, none of that side of the story is all that convincing. These scenes have some interesting things to say, but they don’t feel thoroughly ironed out and could have used more attention. 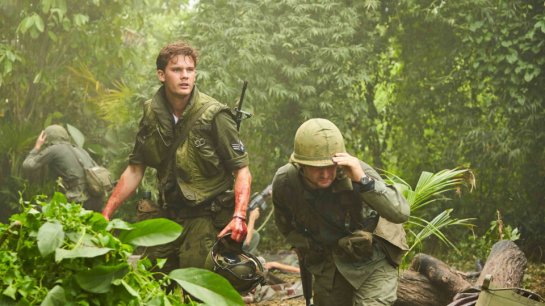 Still, the movie’s main concern is Pitsenbarger and those affected by his heroism and these scenes offer up watch-worthy acting at every turn. One of my early ‘scene of the year’ candidates takes place in Pits’ bedroom where Christopher Plummer shares with Stan the little things he misses most about his son. It’s a powerfully moving sequence bursting with authentic emotion. Just another reminder that Plummer is effortlessly great.

Pickier viewers who demand nuance and ambiguity may not go for the movie’s openness and straightforward approach. And the film is full of big emotional moments that aim right for the heart. Can you see the gears turning during these scenes? Sure. But I can’t deny their effect and Robinson is clearly sharing something he cares about. It’s something that resonates throughout the entire film, even when things seem a little on-the-nose.