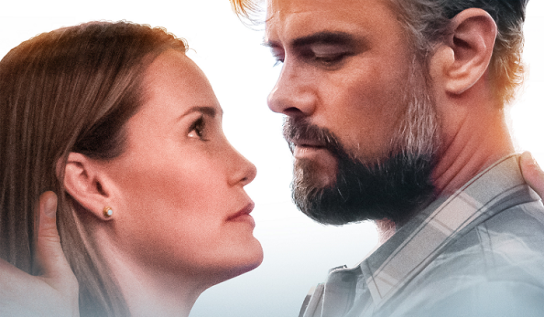 After watching the trailer for Vicky Wight’s new film “The Lost Husband” I was immediately left with a “no thanks, seen it before” impression. But over the years trailers have proven that looks can be deceiving and I love being surprised. Now I’m not claiming this movie brings anything particularly fresh or is breaking any new ground. But it’s a thoughtful, feel-good story which is something we all could use right now.

Much of the story is built around a pretty familiar framework. A hurting woman meets a hunky man. They clash at first but then that inevitable spark is ignited. You know the rest. But Wight makes one pivotal choice that ends up setting her film apart from so many of its kind. She puts her focus squarely on her lead character Libby (Leslie Bibb). It turns out this isn’t a movie about a woman finding love. It’s about a woman finding her way. The prospect of love is certainly an ingredient, but it’s hardly the emphasis.

Libby is still reeling from the death of her husband Danny. In the opening scene she and their two children are leaving her mother’s house in Houston and heading to her Aunt Jean’s (Nora Dunn) farm in rural central Texas. There is a lot of family baggage that goes with her and the movie spends much of its time unpacking it. Suffice it to say Libby and her domineering mother Marsha (Sharon Lawrence) don’t get along. To make matters worse, an ugly scar from their past has left sisters Marsha and Jean at each other’s throats.

Libby only plans to stay at the farm until she can get on her feet. Jean, a widow herself, needs a new farmhand, but before putting her to work Libby needs to be trained. Enter James O’Conner (Josh Duhamel), Jean’s “farm manager”. He reluctantly (it’s always reluctance) agrees to show his city slicker pupil the basics on milking goats, pitching hay, and the importance of opening and shutting gates. That last one provides a metaphor that becomes more obvious as the movie moves forward.

Yes, an attraction springs up between Libby and O’Connor. Yes, we get some of the predictable ‘city girl on a farm‘ humor. Yes, nearly everyone has a secret. But those things are made bearable by Wight’s clear-eyed intent. Her movie never loses sight of Libby’s plight, even during the scattered moments of cheesiness and the couple of scenes that feel like they belong in a different movie (take a strange seance sequence for instance). Grief, family conflict, reconciliation – just some of the prominent themes Wight thoughtfully navigates. 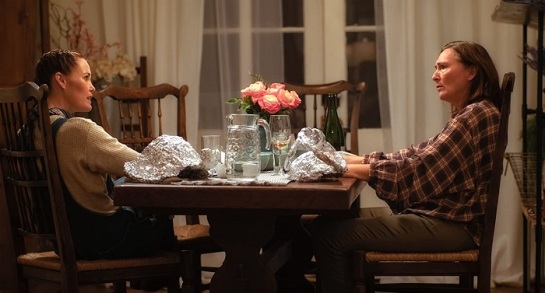 It helps to have an engaging performance from your lead. There’s something a little different about Bibb’s work that I couldn’t quite put my finger on. It took some time for me to get in step with it, but I ended up drawn to the personality she brings to her character. And Duhamel brings a pickup truck full of charm but there is a subtly  to his performance that keeps him out of cliche territory. And it’s very much a supporting role, further emphasizing the movie’s broader interests.

If you skip the forgettable trailer and misleading title you’ll find that “The Lost Husband” has more to offer than you might think. It is hampered by a couple of standard-issue genre tropes, some spotty child performances, and a couple of story angles that needed more attention. But at the core of the movie is a solid story centered on a lead character you root for from the start. And while not perfect, there couldn’t be a better time for a movie like this to come along.