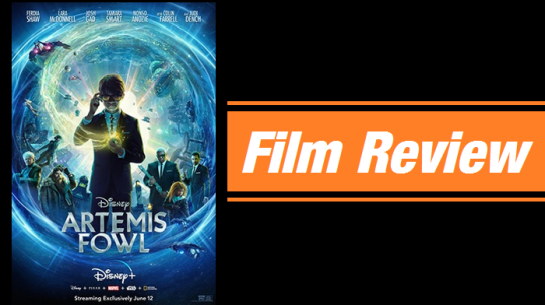 Full disclosure, I had never heard of “Artemis Fowl” prior to its feature film announcement. I knew nothing of Irish author Eoin Colfer’s popular series of children’s novels that featured a total of eight books released from 2001 to 2012. So I can honestly say I came into Disney’s $125 million adaptation with fresh eyes and bearing no allegiance to the source material. I actually prefer seeing movies that way.

The first plans to turn “Artemis Fowl” into a movie began brewing back in 2001. For ten years it languished in development hell until resurfacing in 2011 with Saoirse Ronan attached. Disney grabbed the rights in 2013, hired Kenneth Branagh to direct in 2015, booted Harvey Weinstein in 2017, and set the film for a 2019 release. It was delayed until May 2020 but the COVID-19 pandemic led to the cancellation of its theatrical release. Instead it was released last Friday on Disney’s streaming platform. After seeing it, that’s probably where it belongs.

“Artemis Fowl” is essentially a fruitless franchise launch for a series I doubt we will ever see again. Disney clearly have aspirations, the blatant sequel setup ending proves that. But I can’t imagine this film rousing a passionate enough fanbase for there to actually be more installments. From the very start it stumbles out of the gate, never gaining its footing and ultimately failing to capture the wonder of its magical fantasy setting.

Nestled on the scenic coast of Ireland is the remote Fowl Manor, home to wealthy antiquities collector Artemis Fowl, Sr. (Colin Farrell). Now from what I read this widowed father is supposed to be a “criminal mastermind” but the film does a terrible job of convincing us. I’m still not sure what he did to earn himself such a lofty underworld title. Nonetheless, he lives in the mansion with his only son Artemis II (Ferdia Shaw), a 12-year-old child prodigy whose lone desire is to be with his often absent father.

While on one of his business trips Artemis Sr. goes missing at sea amid news media reports that he was involved in the theft of numerous priceless artifacts. Artemis Jr. receives a call from a shadowy cloaked figure who has kidnapped the senior Fowl and threatens dastardly harm if the young boy doesn’t retrieve something called the Aculos which his father had stolen. Leaning on his dad’s fantastical teachings on the magical world of fairies, trolls, sprites and goblins, Artemis Jr. sets out to find the Aculos and rescue his pop.

Another story thread is set in the subterranean world of Haven City. It’s a high-tech civilization ran by fairies, most notably a cranky, gravelly-voiced Judi Dench who is more convincing as a three pack-a-day smoker than a hard-as-nails fairy police commander. Turns out the Aculos was stolen from them and they want it back. Unseasoned officer Holly Short (Lara McDonnell) is sent on a mission to retrieve it, her mission crosses over with Artemis Jr.’s, and so on. Other not-so-entertaining characters include Josh Gad as an oversized dwarf and Nonso Anozie as the Fowl family’s butler (but don’t you dare call him “butler”). The rest of the cast have such little resonance you’ll barely notice them.

While Branagh’s direction won’t win any awards, it’s the screenplay (from Conor McPherson and Hamish McColl) that really drags this thing down. Aside from the blandest storytelling and the most cookie-cutter characters, the dialogue is mind-numbing. Not in the sense of terrible lines (although we get plenty of those), but in the relentless voice-overs, narration, and exposition. Practically everyone in this movie speaks in stilted overly-explanatory language and nearly every line is treated as a critical information dump. At times it feels more like a college lecture than a movie script as things are spelled out to the most minute detail.

“A creature that consumes humans in 2.97 seconds and fairies in less than 1.”

Mercifully that is one of the shortest examples I could find but it makes the point. “Artemis Fowl” doesn’t give its audience any credit for being able to figure things out nor does it leave anything to the imagination.

Aside from that we get an incredibly cold and dry lead performance from Shaw. I don’t want to drum on a young actor, but the lack of charisma and charm he brings to his character makes him hard to digest as a serious protagonist. Add to that an astonishingly shallow villain so thinly-sketched that we basically forget about her for most of the movie. Her origins, her motivations, her end goal – who knows and frankly who cares.

Now it’s 100% possible young children may love “Artemis Fowl”. In fact I’m almost certain some will. So if you have kiddos this is a pretty harmless time-passer especially as part of your Disney+ subscription. But I can’t review the film through their eyes, only mine. And it’s hard to give this movie a pass when so many others have appealed to children while being enjoyable and competently made.