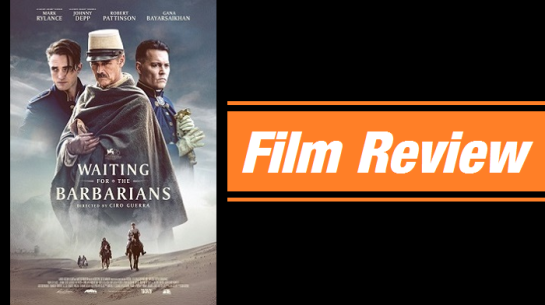 Set within an unnamed territory, an unnamed Magistrate oversees a remote outpost for an unnamed empire. This shrewdly calculated ambiguity has a steady presence throughout “Waiting for the Barbarians”, the new film and English-language debut from Columbian director Ciro Guerra. It’s ambiguous for a reason – to sharpen the relevance for today by not assigning or restricting what we witness to a specific time or nation. Through a broad yet clear lens Guerra indicts both the practices of the past and the mindsets of the present.

“Waiting for the Barbarians” is an adaptation of J. M. Coetzee’s 1980 novel which explored the ugliness of imperialism and its lasting influence on modern thought. Coetzee also wrote the screenplay (his first) which patiently unwraps the story through its ruminative rhythm and well-tuned characters. And even as its dense early table-setting gives way to the quieter yet more visualized tragedy of the second half, the sense of pertinence is ever-present. And let’s be honest, it doesn’t hurt to have Mark Rylance, Johnny Depp, and Robert Pattinson fleshing our your characters.

Rylance plays the well-meaning magistrate and if there ever was an actor who exuded gentle, unfeigned integrity it’s Rylance. His Magistrate manages the frontier settlement with an air of peaceful passivity. He’s content with his life there, quietly collecting and cataloging old area artifacts  while occasionally mediating minor squabbles among locals.  He carries himself admirably and is convinced that his benevolence makes him a welcomed presence. However, good intentions and feelings of self-fulfillment blind him to a glaring hypocrisy which he’s eventually forced to reckon with.

Everything changes with the arrival of Colonel Joll (Depp), a member of the Empire’s security force who has been sent to inspect the outpost and investigate alleged unrest on the outskirts of the frontier. We see hints of Depp’s patented eccentricity in his rigidly upright posture, stony-faced demeanor, and steampunkish sunglasses (they’re all the rage back home). But it’s Depp’s words that reveal the most about his character. Joll speaks with an icy malice, coldly absorbing the Magistrate’s initial hospitality before getting down to the business of his visit.

Joll begins rounding up and questioning local nomads with the avidity of an authoritarian, torturing those deemed to be “barbarians” by his superiors. No scene captures Joll’s dry and calloused ruthlessness better than his chilling explanation of the “patience and pressure” approach to interrogation (hint: far more emphasis is on pressure). “Pain is truth. All else is subject to doubt.” And just like that Guerra and Coetzee put a spotlight on the real barbarians. Meanwhile all the Magistrate can do is helplessly watch.

Joll and his soldiers depart almost as quickly as they arrive leaving the Magistrate to handle the mess they left behind. But it’s not as though he has clean hands. The almost messianic overtones of the early scenes fade as the Magistrate’s complicity, though subtle and seemingly benign, are brought to light. And as much as he wants to disassociate himself from Joll’s terror, he slowly begins to see that (though cut from a different cloth) he and Joll do the biddings of same master. 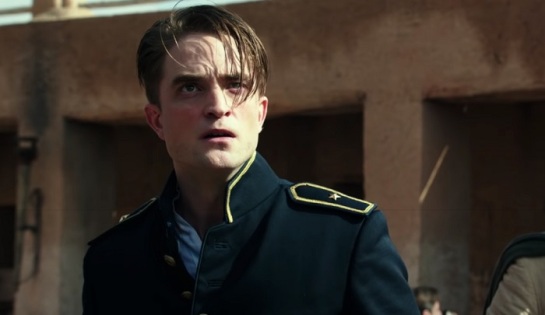 As a form of self-instituted penance the Magistrate takes in an indigenous woman ravaged by Joll’s brutality (she’s opaquely  played by Gana Bayarsaikhan). He nurses her back to health, but more as a balm for his own bruised conscience rather than for her well-being. It’s only when he’s jolted out of his guilt-stricken haze that he finally does the right thing. But in doing so he sparks the ire of the Empire and finds himself under the boot of the very authority he once represented.

Coetzee’s deliberately paced  script gives the actors plenty of room to leave their marks. While Depp instantly grabs your attention with his convincingly sinister presence, it’s Rylance who carries the emotional workload. With a soft-spoken and heartfelt authenticity, his performance manages to secure our sympathy and pity. He’s gives us a man on a journey, who eventually finds his conviction, and willingly pays a price for it. Pattinson gets a small but effective role as young officer who’s clearly a product of the Empire. By the time he comes around, good and evil have been clearly defined.

“Isn’t that what war is about?” a young officer brashly asks the appalled Magistrate, “compelling a choice on someone who would not otherwise make it?” The ugliness of the question highlights the deep-rooted metaphor at the core of “Waiting for the Barbarians”. Underneath cinematographer Chris Menges’ stunning sun-blasted desert landscapes and some key performances lies a stinging rebuke of the past, a mirror to the present, and a warning of the future. It’ll be too broad and figurative for some, but I loved its willingness to trust the viewer. And the near apocalyptic final shot only adds to the title’s richness. “Waiting for the Barbarians” premieres this Friday in select theaters and on VOD.