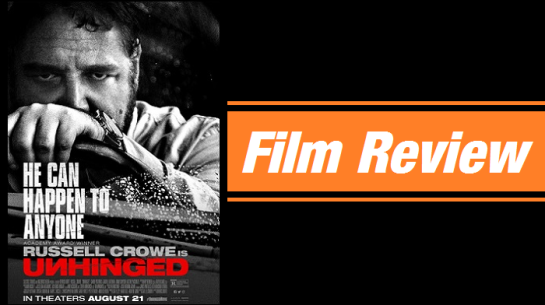 Movie theaters all around the country are welcoming back audiences with “Unhinged”, long advertised as the first major new release to come out on the big screen in five months. After several delays due to the coronavirus pandemic, the movie is finally set to open exclusively in theaters this weekend. “Unhinged” is a road-rage thriller from director Derrick Borte and writer Carl Ellsworth that starts off with a pulpy bang, foregoing all niceties and getting right to the dirty work of putting a face to its title.

In its terrific tone-setting opening, we see a man played by Russell Crowe sitting in his pickup truck as rain pours down from the night sky. He looks haggard and empty – his nerves clearly shot. He pops some pills, pulls off his wedding band and flicks it over his shoulder. With a sudden glance of calm resolution, he steps out into the downpour, pulls a long claw hammer and a gas can from his backseat and walks to the front door of a two-story suburban home. The violence that follows firmly sets him as the film’s antagonist and all before the title hits the screen.

That shocking prologue puts “Unhinged” in an interesting place. It’s a rousing, savage introduction that sets high expectations which the rest of the movie works hard trying to reach (it never quite does). One thing is for sure, Borte’s shrewd table-setting gets its hooks in the audience and Crowe’s grim manifestation of modern society’s festering angst, fury, and incivility leaves you glued to the screen.

Not wanting to overplay its ‘crazy man’ hand, the movie pivots to its main story. Recently divorced  Rachel (Caren Pistorius) has hit rock-bottom, struggling financially while trying to take care of her young son Kyle (Gabriel Bateman). After oversleeping she speeds through the dense traffic of an unnamed city (filmed in and around New Orleans) to get her frustrated son to school on time. “Three tardies is an automatic detention” Kyle grumbles, used to his mother’s perpetual lateness.

Rachel pulls up behind a pickup at a traffic light. The light turns green but the truck doesn’t budge. A stressed Rachel lays on her horn and swerves around followed by an angry flip of her hand. At the next light the truck pulls beside her, the man from the prologue in the driver’s seat. He rolls down his window and explains that he’s been having a rough go and apologizes demanding Rachel do the same. When he doesn’t get the response he’s looking for his poorly veiled indignation boils over. “I don’t think you even know what a bad day is.” he seethes. “But you’re gonna find out.”

The encounter sets the single-minded story in motion as the deranged madman terrorizes Rachel for the duration of the movie’s running time. The man (who calls himself Tom Cooper in one scene but is hardly convincing) follows Rachel around the city, actually getting her phone at one point and threatening to kill her loved ones. “Who’s going to die? Or do you want me to play Russian roulette with your contact list?”  Borte squeezes out everything he can from the simple story, cranking the tension level to 10 and not shying away from amping up the gruesome nature of the violence.

Pistorius makes for a solid protagonist, ably portraying a single mother down on her luck but not without her own shortcomings. She’s steadily convincing whether conveying abject terror or mama bear grit when protecting her son. But it’s Crowe who takes no time reminding us of his A-list acting chops. We know from the chilling opening that his character has more going on than a simple case of the Mondays. But Crowe goes all-in, bulling through scenes with sadistic blunt force. He’s the one people will be talking about.

“Unhinged” is a simple yet satisfying thriller that by the end turns into full-on maniacal horror. Its simplicity is its biggest flaw. While the film aggressively barrels forward, it sticks to its one single lane and never taking a detour. You know where it’s going to end. Still the trip there is worthwhile in large part thanks to Crowe and the unsettling menace he brings to the screen. You never doubt his character’s burning hatred towards everything living including himself. It’s great to see Crowe in top form once again. “Unhinged” opens Friday only in theaters.