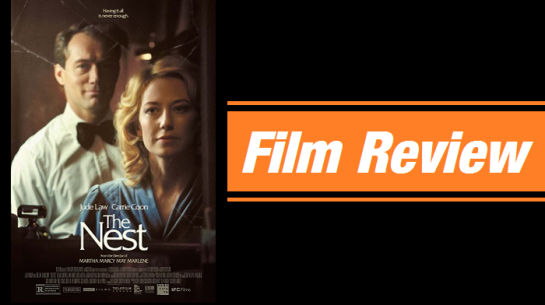 Back in 2011 writer-director Sean Durkin made a splash with his feature film debut “Martha Marcy May Marlene”. The small budget psychological drama not only introduced a fresh new filmmaker, but it was the eye-opening first film for Elizabeth Olsen. “Martha” wow’d most critics with its handling of mental trauma and cult life. Yet to this day I still grit my teeth at its abrupt unsatisfying ending – a frustrating exercise in ambiguity that’s simply too clever for its own good.

It’s been almost ten years since “Martha” and we finally get Durkin’s follow-up. “The Nest” is a slow-burning family drama that dangles genre teases in front of us like a carrot. Sometimes it hints at being a thriller, other times a horror film. In reality its thrills are muted and the horror is of a deeply human nature. The tension it builds is relational rather than supernatural; personal instead of maniacal. It’s channeled through the story’s centerpiece – a corroding relationship between a husband and wife. Durkin digs deep into the minutiae of married life, showing the slow steady decay of a once loving union and the unsettling effects it has on their entire family. 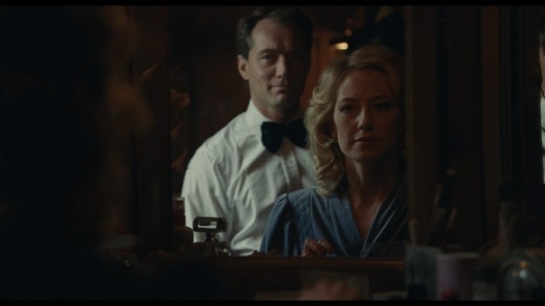 Jude Law has always possessed a disarming charm and Durkin uses it to the fullest. He’s in top form here playing Rory O’Hara, a commodities broker in a state of disillusionment. Everything looks ideal. He has an attractive and seemingly happy family living well above the poverty line. The money’s great and they have a nice house. His wife Allison enjoys being close to her family and training horses while their two kids Ben (Charlie Shotwell) and stepdaughter Sam (Oona Roche) love where they are.

Then Rory drops the line “Things aren’t working for me here.” He’s had a taste of the American Dream and it wasn’t filling, so when a “business opportunity” opens up in London he decides to uproot his family from their comfortable suburban life and move overseas. Allison is rightfully frustrated. It’ll be their fourth move in ten years. Yet she goes along with it, doing what a good wife is expected to do in the mid-1980s. Her mother even tells her “It’s not your job to worry. You leave that to your husband.”

I should mention the movie doesn’t explicitly tell us when it’s set. But it’s clear by mentions of President Reagan on newscasts, Heart and The Thompson Twins playing on the radio, and by someone using an actual rotary phone (you older readers remember those, right?). Durkin gives us a good example of how to use a time period without exploiting it or overusing nostalgic callbacks.

The first thing Rory does in England is rent out a massive country estate in Surrey. Can they afford it? He certainly lives like it, but Allison knows better. She has long played the role of the dutiful wife, supporting her husband while setting aside her own ambitions. But under the surface she’s an intelligent, strong-willed woman who’s starting to see through her husband’s facade. She knows something is out of whack. When she begins noticing inconsistencies with his stories and behavior she questions him. His responses are telling. “I deserve this!” he screams, like a petulant entitled child. 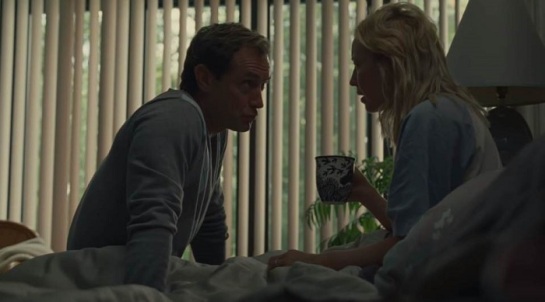 Coons is fantastic and we see much of the film through her eyes. But we also get some interesting changes in perspective. At first it seems like the story is being told from Rory’s point-of-view, but it quickly shifts to Allison who carries us through most of the movie. But then when you least expect it the film makes yet another transition in the final act. But it’s still Coons who anchors our sympathies and gives us the most clear-eyed insight.

While “The Nest” may throw off those expecting a more traditional psychological thriller, I was hooked thanks its two penetrating lead performances and Sean Durkin’s meticulous handling of their characters. Unfortunately like “Martha”, Durkin’s latest doesn’t end on the strongest note, leaving us to do more speculating than deep thinking. The story slowly and methodically builds the tension before coming to a screeching stop. Of course there is artistic intent behind the abrupt finish, but as a viewer it left me feeling a little unsatisfied. “The Nest” opens September 18th in select theaters and November 17th on VOD.