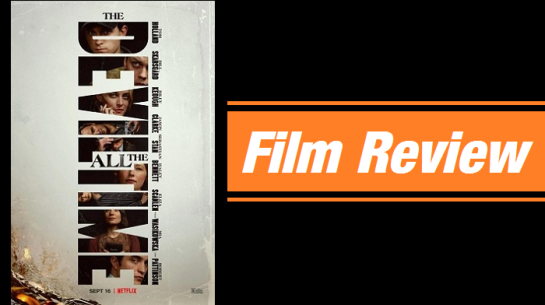 A star-studded cast drives director Antonio Campos’ period crime thriller “The Devil All the Time”. His film is an adaptation of Donald Ray Pollack’s 2011 novel about a contrasting yet inextricably linked group of people in rural Ohio and West Virginia. The movie’s scope is broad (probably too broad), and you may need a notepad to keep up with the myriad of damaged characters. Yet there is a fascinating element to the film that keeps you engaged even as you realize Campos bit off a little more than he could chew.

Pollock serves as the movie’s narrator, bouncing us along the film’s grim and unpleasant timeline, making stops in places like Coal Creek, West Virginia, and Knockemstiff, Ohio. The story starts with glimpses of the final days of World War II, moves to the mid-1950’s, and then wraps up in the Vietnam War era. It not only follows two generations of the small town Russell family, but also the many people they’re either linked to or encounter along the way. So as you can see there is a ton of ground to cover even with a 138 minutes of running time.

The film’s central character is Arvin Russell, played as a nine-year-old by Michael Banks Repeta and then later by Spider-Man himself Tom Holland. Campos (who co-wrote the screenplay with his brother Paulo) begins by reflecting on Arvin’s tumultuous childhood. His father Willard (an intense Bill Skarsgård) was a South Pacific war veteran who suffered from PTSD. Willard was a hardened man who taught Arvin that sometimes you must fight violence with violence, a lesson that would stick with his son.

Willard also had a gnarled perspective on faith, one influenced more by the atrocities he witnessed on the battlefield than the words of a well-versed preacher. He becomes obsessed with prayer especially after his wife and Arvin’s mother Charlotte (Haley Bennett) is diagnosed with cancer. It’s not hard to see the road signs to tragedy. Arvin soon finds himself living with his grandmother Emma (Kristin Griffith), bringing with him a childhood of psychological trauma.

You would think that alone would be enough story for a two-hour movie. But that only cracks the shell of what “Devil” seeks to cover. We meet Arvin’s new step-sister Lenora (Eliza Scanlen), a child with her own brutal parental tragedy who is adopted by Emma. Lenora is the film’s closest portrait of innocence. Much like her mother Helen (played in earlier scenes by Mia Wasikowska), Lenora is kind, gentile, and devout. Arvin makes it his purpose to protect her from the world and all of its ugliness.

And there are so many more players. Jason Clarke and Riley Keough play Carl and Sandy, a pervy serial-killing couple targeting hitchhikers. Sebastian Stan plays a shady sheriff who’s more interested in his re-election than law and order. Harry Melling has a brief yet creepy role as Lenora’s father and a psycho preacher wannabe. And a scene-chomping, scene-stealing Robert Pattinson arrives around the midway mark playing Reverend Preston Teagardin. Out of all of the English and Australians working their best American drawls, Pattinson’s is the most entertaining. He brings an accentuated southern flavor along with a bit of camp. There’s no real depth to his character, but Pattinson makes him interesting. 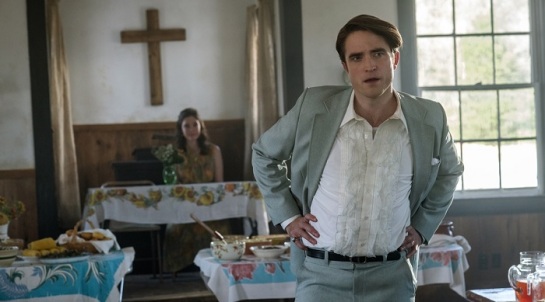 It should be said that it’s not just Pattinson who impresses. The film’s biggest strength is its cast and the performances are outstanding top to bottom. Those who only know Holland from his web-slinging MCU gig will be surprised at the range he shows here. Meanwhile talents like Pattinson, Keough, and Clarke have to work a little harder with the thinly sketched characters they are given.

“The Devil all the Time” is a cold and relentless tale of human depravity with hardly a glimmer of light. And the few instances of hope (and I do mean FEW) are usually planted just so they can be squashed. It tells a story driven by characters ranging from deeply flawed to all-out evil and each are forced to drink Campos’ bitter cocktail of violence and religious distortion. It’s hard to find much meaning in at all other than violence begets violence and false religion is bad. But the casting is spot-on and Campos serves up just enough to keep us nibbling all the way through. If only I didn’t leave still hungry. “The Devil all the Time” is streaming now on Netflix.