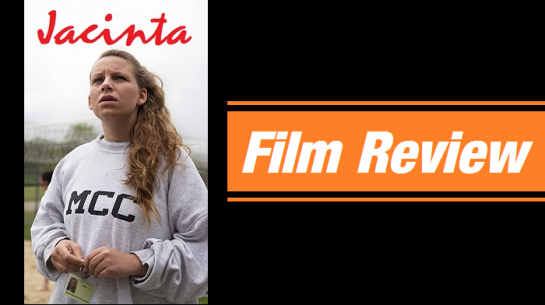 There have been countless movies, both documentaries and feature fiction, that have spoke to the issue of drug addiction. Few have packed the same raw and visceral punch as Jessica Earnshaw’s “Jacinta”, the winner for Best U.S. Feature at this year’s Hot Springs Documentary Film Festival. With its crushingly intimate and unflinching perspective, “Jacinta” spares nothing in its depiction of dependency, capturing a painful reality that’s all too familiar for many Americans.

From the very start you can’t help but recognize the unprecedented access Earnshaw was given. Her film starts inside the walls of the Maine Correctional Center. There we meet 26-year-old Jacinta who’s serving the final days of a nine month sentence. We learn a lot about this young woman through her own words. She has been in and out of prison since she was 15. At 16 she had her darling daughter Caylynn. Jacinta is bright, spirited, and engaging. She’s also a heroin addict, the result of a deeply troubled upbringing.

During the early prison scenes we’re introduced to Jacinta’s mother Rosemary who’s serving a much longer sentence in the same facility. She has lived a hard life and many of her daughter’s problems can be traced back to her. Yet the two remain intensely close. We learn that Rosemary was pregnant at 14 and had three children by the time she was 18. An addict herself, she too has been in and out of prison, but it’s her vices within her family that are the most unsettling. 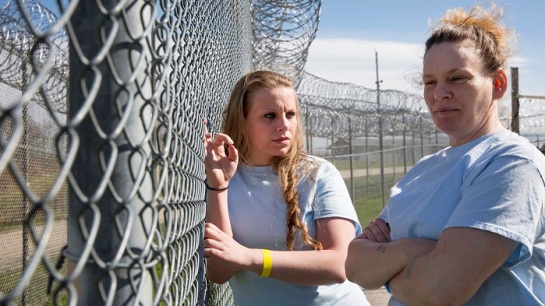 Over the course of the film revelations come to light concerning Rosemary’s relationships with her children. Earnshaw doesn’t set out to paint her as the villain. Everything we learn comes from the people on screen and we are allowed to come to our own conclusions. One thing is certain, Rosemary loves her daughter in her own unhealthy way. But their codependent mother/daughter dynamic proves to have devastating effects especially for Jacinta, a young mother herself who is already at a dangerous crossroads.

After an emotional good-bye to her mother, an anxious Jacinta is released from  prison. Earnshaw’s camera follows her as she’s greeted by her compassionate father Rick who helps her get settled in a sober house. There is an air of hope throughout these scenes especially when Jacinta reunites with 10-year-old Caylynn. The two spend a wonderful day together, connecting as if they had never been apart. All the pieces seem to be in place for an uplifting redemption story.

But we quickly learn that happiness is a brittle thing for an addict, and the lure of old hometown acquaintances is palpable. In one of the film’s most devastating scenes Jacinta tells her daughter she’s leaving the halfway home. Caylynn earnestly replies, “What if the sober house is the only thing that’s keeping you going where you’re supposed to?” Sometimes it’s kids who see things the clearest.

Within 90 minutes of dropping off Caylynn (who lives with her paternal grandparents in New Hampshire) Jacinta is high and the feelings of hope evaporate right on our screen. It’s one of several uneasy situations for Earnshaw who also serves as the film’s cinematographer. No stranger to a camera, Earnshaw shoots each of these moments up close and with brutal honesty. Take when Jacinta is picked up by her friend at a shopping mall immediately after shoplifting a laptop. Earnshaw sits in the backseat filming as the two young women up front discuss the crime. Before they’re out of the parking lot Jacinta pulls out a syringe and shoots heroin. It’s harrowing and heartbreaking.

But nothing is as shattering as pre-teen Caylynn, mature beyond her years and acutely aware of her mother’s condition. Seeing her wrestling with her feelings and trying to understand her mom is hard to watch. Seeing her later resign to the belief that she has lost her mother for good is even harder. Like the bond between Jacinta and Rosemary (but in a much different light) it again highlights the intense bond between a mother and daughter. It also leaves us praying for the cycle of addiction to be broken and for Caylynn to have the life she’s longing for.

Despite all of her faults, there is never a moment we don’t root for Jacinta. The film never condones her actions, but it does offer perspective by plowing deep into her family history. Ultimately what the film provides is a raw, real-world observation of a young mother in the throes of addiction, her face often overtaken with sadness and defeat, yet yearning to be the mother she never had. It’s far from easy viewing, but it’s sure to open a lot of eyes. And many will be left thinking about Jacinta and her family for days afterwards. “Jacinta” is appearing in several film festivals across the country.