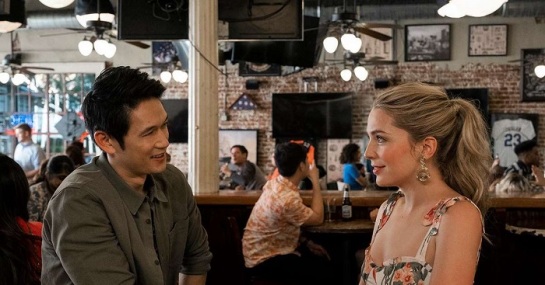 I think I’m becoming a Jessica Rothe fan. The 33-year-old Denver, Colorado native has brought energy to nearly every movie I’ve seen her in. She had a small but sparkling roll in “La La Land” contributing to one of my favorite musical numbers in the film. She was a lot of fun and showed her range in the two “Happy Death Day” films. And earlier this year she once again showed off her singing chops in the flawed but enjoyable “Valley Girl”. Now she’s set to star in “All My Life”, a film that’s one part mushy romance, the other part terminal illness drama. Hmm.

Rothe stars as a young woman named Jenn who meets and falls for Solomon (Harry Shum Jr.) Over time the two grow more and more in love and want to spend their lives together. But when Solomon finds out he has cancer, it (as you can imagine) dramatically challenges their plans for the future. The first trailer gives equal time to both sides of their story, and while I’m anxious to see Rothe, this looks a little iffy. Could be sweet and heartwarming. Could be sappy and cheese-filled.

“All My Life” opens later this year. Check out the trailer below and let me know if you’ll be seeing it or taking a pass.