Robin Wright both stars in and steps behind the camera to make her directorial debut with “Land”. This solemn and subdued drama, written by Jesse Chatham and Erin Dignam, had its world premiere at this year’s Sundance Film Festival. Wright describes her film as being about “resilience in the face of adversity“. It’s also a delicate study on the crushing effects of unchecked grief and an examination of both physical and emotional isolation.

Wright plays Edee Mathis, a middle-aged woman crumbling under the weight of sadness. The reasons are mostly left for later, but we do get hints in some brief scenes with her sister that someone incredibly close to her has recently died. “It’s really difficult to be around people“, she confesses to her therapist. When asked about her withdrawal from those closest to her Edee responds “Why would I want to share that with anyone“. In an almost prophetic warning the therapist replies, “But that means you’re alone with your pain.”

It’s this crushing sorrow that drives Edee to leave the city, leave her friends, and leave every trace of her old life behind. In an elegant opening credits sequence we see Edee driving through the gorgeous Northwest, probably Wyoming or Montana. She’s purchased a rundown yet charmingly rustic cabin on the side of a mountain. Against the previous owner’s advice, she pays him to return her rental car and U-Haul trailer, leaving her isolated and disconnected from everything other than her pain.

It’s here that Wright shows a remarkable amount of restraint. With a striking simplicity both in front and behind the camera, Wright shows us Edee’s attempt to adapt to living in the wilderness. Wright’s camera sits quietly watching Edee clean up the cabin, tow water from a nearby stream, try her hand at fishing. From one angle it all looks like an attempt to run away and start over solely on her own. In a darker way it feels like she has sentenced herself to live out her remaining days in solitude. And content to let nature have its way even to the point of taking her life. It’s a means to end her pain while in a roundabout way keeping a promise she made to her concerned sister. “Don’t hurt yourself. For me.”

She nearly gets her wish when the harsh winter months hit. Out of food, with no fire, and no connection to the outside world, Edee  is about to succumb to the elements  when she’s discovered by a passer-by named Miguel (Demián Bichir) who nurses her back to health. Soon he’s teaching her the proper way to fish, hunt, and trap. His visits are seasonal at first, intent on respecting her wishes to be left alone. But then they become more frequent and the two develop a quietly distinct bond. One built around mutual feelings of loneliness, loss, and a special shared affection for 1980’s music. 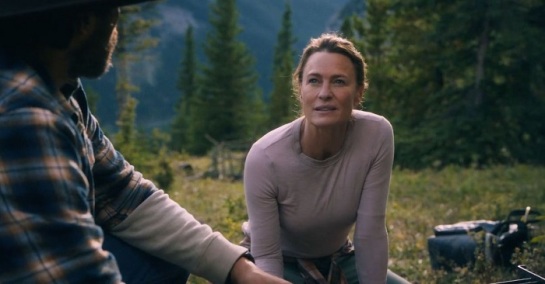 Watching the trailer my first instinct was to see Miguel as a ghost; a figment of Edee’s imagination to keep her company and to help her find her way. Or maybe he was an invention by the filmmakers to add more layers to her character. But Miguel’s presence is far more nuanced. He symbolizes the very thing Edee loses when isolated – kindness, compassion, and companionship. Miguel echoes the better side of humanity. And when we learn he’s a widower carrying the effects of a personal tragedy all his own, he evolves into a symbol of hope.

“Land” could have easily fallen into any number of narrative traps or taken one of many well-worn and more conventional routes. I admit there is a hint of familiarity to the movie’s premise. But Wright’s performance and direction pulls us into her character’s journey through a tight and intimate focus and a subtly affecting minimalism. And she never passing up a chance to show the majesty of nature. We end up with a story about finding peace and solace, not in isolation but in communion. And during time of so much division, it turns out to be an especially timely message. “Land”