The 24-year-old Zendaya started in the entertainment business at an early age, appearing in a number of kids television shows and movies. But her big screen breakout came in 2017 when she was cast in “Spider-Man: Homecoming”. Since then she’s appeared in “The Greatest Showman”, “Spider-Man: Far from Home”, and the highly anticipated remake of “Dune” (assuming it does eventually come out).

The two stars come together in the new Netflix film “Malcolm & Marie”, an exquisitely shot chamber piece about a couple laying bare their tumultuous relationship over the course of a single fight-filled night. The film is written and directed by Sam Levinson who unquestionably has the commitment of his two lone cast members. But despite its charismatic co-leads, “Malcolm & Marie” devolves into an endurance test for the audience, one that grows more and more unlikable as it winds on.

Washington plays Malcolm, a filmmaker coming off a successful premiere screening of his new movie. Zendaya plays his girlfriend Marie who attended the premiere with him but was left with a sour taste in her mouth. The story begins with the couple arriving at a posh ultra-modern house provided by the production team behind Malcolm’s movie. Malcolm’s plan is to spend the night celebrating with his girl. So the first thing he does is grab a drink, cranks up some James Brown, and playfully dances from one room to another.

Marie is hardly as enthusiastic. She walks straight to the bathroom then to the kitchen where she puts on a box of mac-and-cheese to boil. Malcolm’s dizzying good mood leads to the first of two long-winded tangents about pedantic white film critics. A visually uninterested Marie listens to his rambling but clearly has something else on her mind, namely Malcolm forgetting to thank her during his speech at the premiere. While not mentioning her rightfully irks Marie especially since she believes she was the inspiration for his film, it just cracks the door for what becomes a night of fighting, fighting, and more fighting.

“I promise you, nothing productive is going to be said tonight“, Marie warns Malcolm before the venom starts to spew. Boy she wasn’t kidding. From there Levinson feeds us a steady buffet of profanity-laced tirades, meltdowns, and savage arguments with each of the two characters using long monologues to tear each other apart. It’s a toxic and unceasing back-and-forth that both Washington and Zendaya work hard to sell. But regardless of how convincing their performances are, it’s not easy to buy all that they’re saying and you can only take so much high-volumed vitriol before the characters become insufferable. 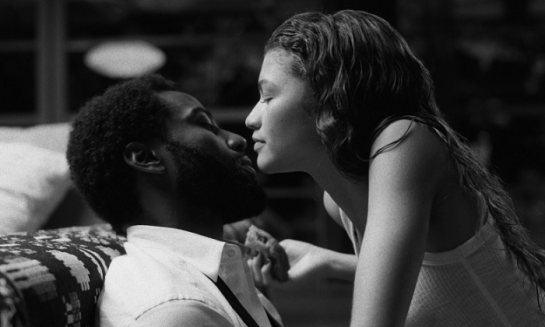 Levinson’s script may drown us in animosity and resentment, but it does succeed in opening up his characters. Malcolm and Marie’s fights (and the occasional short breathers in between) tell us quite a bit about them, picking at scabs from their pasts and exposing their anxieties and insecurities. Then you have Levinson shooting on the experience of black filmmakers and the frustrations they feel when labeled, pigeonholed, and forced into categories because of the color of their skin. While equally loud and abrasive, these scenes do give us one of the few points of agreement between Malcolm and Marie – a shared disrespect for “Karen from the LA Times”, a white film critic indelibly entrenched in Malcom’s (and Levinson’s) headspace. But like everything else, even that turns into a disagreement between them.

“Malcolm & Marie” was filmed early into the COVID-19 lockdown on a minuscule budget, with a two person cast, one location, and a very limited crew (Zendaya actually did her own hair and makeup). The film offers up some alluring visual compositions, using the monochrome and the house’s walls of windows to do some interesting things with the camera. But regardless of how good the movie looks, by the end I was simply exhausted from the yelling. I was left cold and unconvinced of the central relationship. And I was left asking what was the point? Is it that love is hard? That love is messy? Both of those things are true, but I can’t help but think there are better and more bearable ways of conveying those themes. “Malcolm & Marie” is streaming now on Netflix.