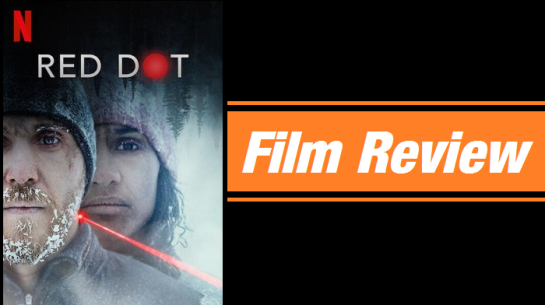 There’s more than frigid weather and armed stalkers threatening a young couple in the tight and tense Swedish film “Red Dot” from director and co-writer Alain Darborg. Despite its familiar framing, “Red Dot” mixes ingredients from several genres to come up with its own unique flavor. It’s a run-for-your-life horror movie one minute and a gritty survival thriller the next. But when blended together the story has some heavy things to say about humanity and the world we live in.

The film is driven by two terrific lead performances. Nadja (Nanna Blondell) and David (Anastasios Soulis) are so in love when we first meet them. He has just graduated from engineering school and they’re about to move to Stockholm where she will finish medical school. But before they go David pops the big question and asks Nadja to marry him. She enthusiastically accepts and the two are ready to spend the rest of their lives together. “It all begins here“, David lovingly pledges. 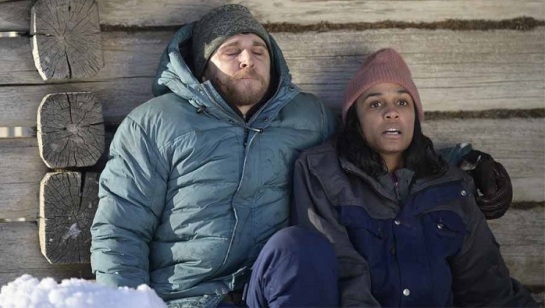 Jump ahead eighteen months and things have changed. Now married in Stockholm, David has a great job but works long hours and does nothing but lounge when he’s home. A frustrated Nadja resents that she’s left with all the housework on top of her studies. She’s also hiding a secret from her husband that adds to her stress. After five tests to be certain Nadja has learned she is pregnant. Normally that’s exciting news, but considering the state of their marriage she’s terrified.

Realizing they desperately need to rekindle their fire, David surprises Nadja with a romantic weekend getaway to snowy Northern Sweden. There they can focus on each other, do a little skiing, and camp out under the beautiful Northern Lights. The trip starts by hitting a lot of familiar notes. For example this isn’t the first time we’ve seen city folks venturing into wilderness and having a run-in with some backwoods locals. For David and Nadja it begins with two creepy-acting brothers at a gas station. Then an uncomfortable encounter with oddballs at a lodge. But everything gets on track and after a fun day outdoors they retire to their tent underneath the famed aurora borealis.

Then their night is interrupted when a bright red laser dot (hence the title) appears on the canvas of their tent, moving around like a laser pointer. But as you can probably guess, it’s no laser pointer. Within minutes the two are indeed running for their lives into the ice-cold darkness with bullets zipping by their heads from a shooter they can’t see. At the same time this is where the movie’s survival elements really kick in with Darborg utilizing his snowy environment extremely well. There are a couple of times where the sensation of freezing from the cold is vivid and palpable. 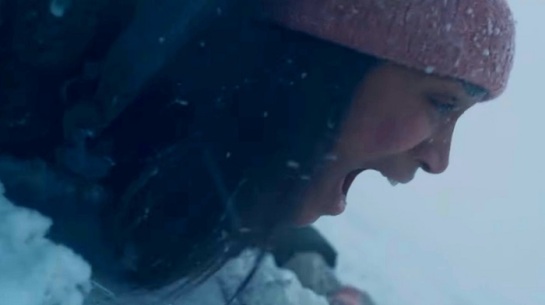 As things play out the movie does struggle with an issue that many of these films do – questionable and head-scratching decisions. Yes, you can chalk some of it up to the anxiety of the moment and not thinking clearly. But more than once I caught myself asking things like “Why didn’t you grab the gun?” or yelling “Go back and get the snowmobile!”. But the story makes up for it with a twist-filled and slightly subversive final act that does some spirited things with the themes of making shallow judgements and running from your past.

By the end of “Red Dot” I found myself surprised by what it had become. What started as a familiar concept with a routine setup turned into something with a lot more meat on its bones. It fully embraces elements of its genre influences, but the film is built on some heady ideas that are brought together well in a visceral second half that completely throws out any notion of black and white; good or bad. It looks at an ugly side of humanity and what we as people are capable of doing. And of course it looks at the consequences for those actions which we too often fail to consider. “Red Dot” is now streaming on Netflix.