2020 was quite a year for Amazon Studios. Take a quick gander at their catalog and you’ll find star-driven features, sharp-minded indies, ambitious anthologies, and some insightful documentaries. They have showcased a diverse selection of films and filmmakers while opening doors for some exciting new voices. And while all of those things are true, for some people it’s as simple as this – they’ve made some really entertaining movies. Now you can add “I’m Your Woman” to that list.

The movie is directed by Julia Hart who also co-wrote the script with her husband and co-producer Jordon Horowitz. The two are the minds behind 2018’s “Fast Color”, a wonderfully moving superhero drama that never quite got the audience it deserved. “I’m Your Woman” is a much different movie. It’s a neo-noir crime thriller that happens to have a lot to say about motherhood and carving out your own identity. 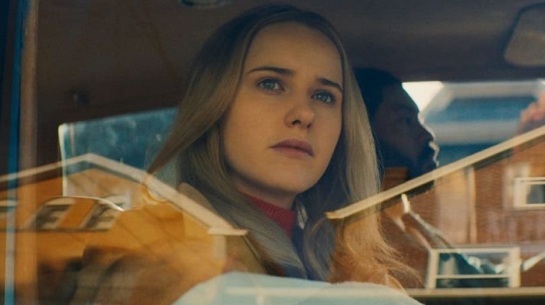 Rachel Brosnahan of “The Marvelous Mrs. Maisel” fame stars as Jean, a young wife living a comfortable life in the late 1970’s thanks to her husband Eddie (Bill Heck). He’s a small-time hood who keeps his activities to himself and Jean is content to ask no questions. In fact Eddie keeps his business so secretive that Jean is stunned when he suddenly brings home an infant baby. The couple has wanted children, but Jean hasn’t been able to get pregnant and they can’t adopt due to Eddie’s record. Yet a few minutes into the movie Jean finds herself a new mom.

But things take a dramatic turn when Jean is awoken in the middle of the night and informed that Eddie’s latest job went south and some really bad people are not only looking for him but for her. Eddie has went into hiding but one of his associates named Cal (Arinzé Kene) is tasked with getting Jean and her baby to safety. From there the story makes several stops and introduces several new people. None of them really want to tell Jean (or us) anything so she spends a lot of time in the dark wondering who to trust. Eventually she learns Eddie wasn’t so small-time and it’s ultimately up to her to save herself and most importantly her child. And she’ll have to parse friend from foe in the process.

The film moves along at an interesting but unusual pace. There are scenes of high tension and suspense especially in the moments when Eddie’s rivals close in on Jean. But then you’ll get quieter scenes showing Jean struggling with the responsibilities of motherhood but learning from different people she encounters. One of the most intriguing of the supporting characters is Carl’s wife Teri (Marsha Stephanie Blake), a tough-minded woman who is well versed in the life of a criminal’s wife. Like everyone else she has her secrets, but she also inspires Jean to toughen up and be ready for what’s to come.

Of course what’s coming is a violent final act where all of the consequences of Eddie’s actions come back to bite Jean. As someone who hasn’t seen “Mrs. Maisel” the performance from Brosnahan is an eye-opener. In addition we get strong supporting work, a good 70’s throwback vibe, and a surprisingly gritty finish. It can be a bit maddening waiting for the supporting characters to finally reveal to Jean what we already know, but it all adds up to a fun and satisfying female-led noir. “I’m Your Woman” is now streaming on Prime Video.