I kinda knew what I was getting into when I decided to watch Adam Sandler’s “Grown Ups”. Sandler hasn’t put out a good movie in years and his films have become cheap, lazy, and formulaic. As I expected, “Grown Ups” is no different. It’s a tedious and unfunny movie that provides more moans and head-shakes than laughs. It’s a lame and juvenile exercise in banality that again proves that Sandler’s once promising career is on the ropes.

Sandler teams up with Kevin James, David Spade, Chris Rock, and Rob Schneider to play five childhood friends who are reunited after the death of their old junior high basketball coach. After attending the funeral, the five take their families to a lake house for the 4th of July weekend in hopes of catching up. Of course none are completely forthcoming about their lives and instead choose to impress their friends by making things seem better than they really are. Each bring along their own quirky baggage including a nagging mother-in-law, maladjusted children, and a 70-year old wife. Each are played for laughs but none are even remotely funny. Of course families come together, friendships are rekindled, and audiences are bludgeoned to death with one stupid, rehashed gag after another.

Sandler co-wrote and co-produced this mess and he doesn’t seem to know what kind of movie he wants to make here. The movie jumps back-and-forth between family friendly and filthy bathroom comedy with neither being effective. He employs so many of the same cheap and overused gags that have become commonplace in Adam Sandler movies. We get fart jokes. We get urine jokes. We even get lowbrow breast milk jokes. “Grown Ups” pulls out all the stops to try to cover up its appallingly poor writing. You name the gimmick and you’ll probably find it here. 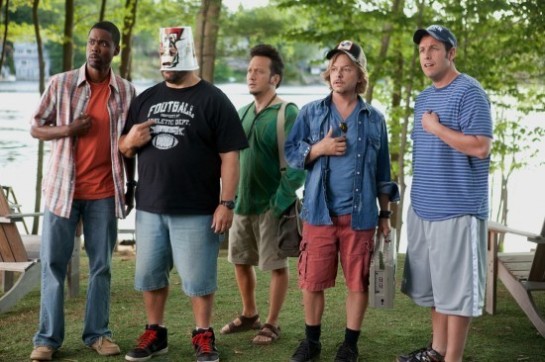 I was also taken back by Sandler’s sometimes shameless uses of the children in the film. In the movie, one boy is 4-years old but still breast feeds. There are several scenes involving breastfeeding with the child present and numerous lines of dialogue that calls for the boy to say all sorts of crude things about it. I’m not trying to say I’m the end-all, be-all when it comes to determining what’s proper for a child or even for what passes as funny. But this really felt wrong and it certainly wasn’t funny. Sandler doesn’t show much more respect for the other child actors but at least they are older and don’t feel quit as exploited.

There is absolutely nothing genuine about “Grown Ups”. The characters feel fake. The relationships feel fake. The attempts at humor certainly feel fake. Even when the movie tries to drum up some emotion and sentiment it feels completely forced and fabricated.  None of the actors really sell their character. Kevin James comes the closest but even he is a mixture of numerous characters we have seen before. Even the wives are shallow and one-dimensional and contribute their fair share of cringe-worthy scenes. The material is so bad that it’s impossible to invest in anyone or believe in anything you’re seeing on-screen.

When it comes down to it “Grown Ups” is yet another sloppy, adolescent “comedy” and another red mark on Adam Sandler’s resume. There’s absolutely nothing to take away from the movie and I could think of a thousand things I would rather do than sit through it again. This begs the question, how on earth did this monstrosity gross over $270 million worldwide? Is this really the best Hollywood can do? Do people really find this stuff funny? Who knows, maybe I’m the one who is out of the loop on this one.