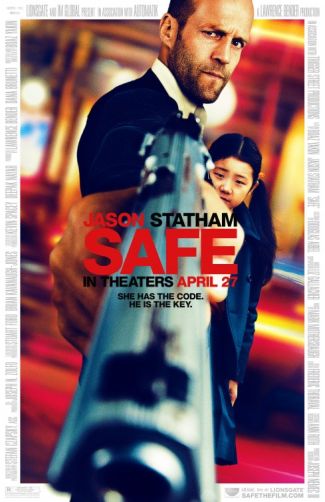 While not all of Jason Statham’s action pictures have been good, you can’t deny that he has an almost infectious tough guy charisma. He’s a believable action movie star even in the middle of some pretty far-fetched action sequences. In “Safe”, Statham shoots, kicks, and punches through some pretty familiar territory. But it’s also a sharply directed action picture that builds on a really strong performance from Statham all the way to its bullet-ridden finale.

Statham plays Luke Wright, an ex-NYPD special agent who has hit rock bottom. We learn that Luke has resorted to cage fighting, something he hasn’t done well at. After winning a fight he was supposed to lose and costing the Russian Mafia a load of money, his life is utterly shattered by the orders of the mob’s leader. Homeless and at the end of his rope, he sees a young Chinese girl being chased by the same Russians. He intervenes to save the girl who he quickly finds is also being hunted by the Chinese Triads and some corrupt NYPD cops. Luke finds himself in the middle of an all out war in the New York City streets as he tries to protect the girl and the long list of numbers she holds in her memory. 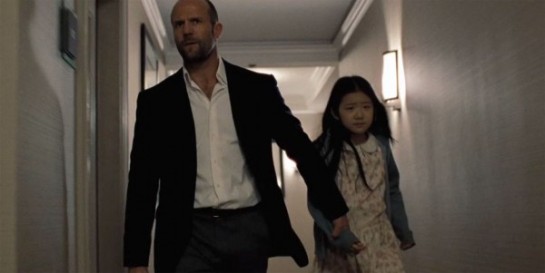 Several things make “Safe” stand out from some of Statham’s other movies.  For one thing, the Luke Wright character shows more humanity than we see in some of his other roles. Statham absolutely has the athletic, tough-as-nails, butt-kicker persona down perfectly. But I was really surprised to see how well he brought genuine emotion to several scenes that called for it. The movie also benefits from a pretty tight and well structured story. It’s fast-paced and adrenaline filled but it’s also cleverly layed out. But that doesn’t mean the story is flawless. There’s nothing that happens that you won’t see coming from a mile away. The only exception is the very end which really didn’t work for me. I’m not going any further because I don’t want to spoil anything, but let’s just say the big finale was a head-scratcher.

But “Safe” is an action movie first and foremost and it delivers plenty of it. There’s plenty of gunfire and bone breaking and the frantic herky-jerky camera work actually works better here than in many other films that employ the technique. Director Boaz Yakin knows Statham’s strengths and he rides them. Statham’s martial arts background fuels some really slick fight sequences and he’s not bad with a pistol either. And while there is plenty violence, Yakin portrays it without buckets of blood. It’s gritty and edgy but it maintains the feel without the unneccessary gore. The action is the movie’s bread and butter and I was sold on it.

This certainly isn’t a movie for everyone and it isn’t a film that will garner a lot of critical praise. But it’s a fun, no-nonsense action picture that I enjoyed. Statham really brings it both physically and with a performance that shows he has some acting chops. The movie is fairly predictable and it’s supposed twist at the end isn’t all that impressive. But will anyone be going to see “Safe” other than to see Statham kick, punch, and shoot his way through waves of bad guys? That’s one of the reasons I went to see it and I definitely got what I paid for.