Going into a Wes Anderson film there are several things you know to expect: a healthy dose of dry and sometimes offbeat humor, a unique visual style, and familiar aesthetics that permeate each of his movies. “Moonrise Kingdom” is no different from other Anderson efforts in terms of it’s storytelling style and visual presentation.  This is his first film since 2009’s Oscar winner “Fantastic Mr. Fox” but it’s clear from the opening credits that his dedication to his style of filmmaking is still as strong as ever.

“Moonrise Kingdom” takes place in a small community on a New England island in 1965. A very Wes Andersonish  narrator sets the table for us and we meet several of the community folks including Scout Master Ward (Edward Norton) the leader of the island’s branch of the Khaki Scouts. While doing morning inspections, he discovers that 12 year-old Sam (Jared Gilman), a picked on, eccentric young boy has run away from the camp. Elsewhere on the island young Suzy Bishop (Kara Hayward) lives at Summer’s End, her home shared with her parents and three young brothers. Suzy is a reserved introvert who has no friends and finds refuge by retreating into her fantasy novels and looking through her binoculars – something that she pretends gives her super powers. It’s through her binoculars that she discovers her mother Laura (Frances McDormand) meeting secretly with the community policeman Captain Sharp (Bruce Willis). Her father Walt (Bill Murray) is impervious to the signs of his wife’s secret fling mainly due to their fractured relationship.

Suzy ends up running away from home and through a flashback we learn that it’s something she and Sam had been planning since they first met at a local church play the year before. The two meet in a meadow then set out on a journey together through the rugged and rainy island terrain. Sam flexes his extensive outdoor knowledge before Suzy by pitching tents, building fires, and catching and cooking fish. Meanwhile, after discovering the kids are gone, the dysfunctional community sets out to find them.

Anderson has several interesting dynamics at work, the first being the relationship between the two kids. It’s easy to see why they are drawn to each other. Both feel detached and out-of-place. There’s a void in their lives and they find solace in the fact that they no longer feel alone in the world. Both Gilman and Hayward are stunningly good especially considering this is the first feature film for both. Anderson’s childlike deadpan dialogue flows naturally from the two characters and he really gives them a believable foundation for the budding adolescent romance. Some have argued that the romance between the two was lacking and never provided the spark to drive the relationship. I argue that there’s no huge passionate spark mainly due to the children’s age and the newness of love and romance. I feel that their attraction to each other is based more on their personal, emotional, and social similitude. Being in each other’s presence fills a substantial emptiness in their lives and let’s them know they aren’t alone. A form of love sprouts up from that and Anderson depicts it with tenderness even amid the laugh out loud moments and the hilarious, straight-faced dialogue. 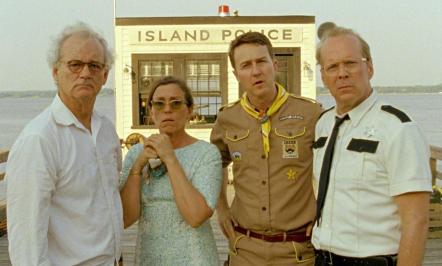 My biggest problem with the way Anderson handles the children’s relationship is the way he handles his child actors in one particular scene. Intended to show a sexual curiosity and almost unwanted compulsion, there is a brief scene where Gilman and Hayward are asked to engage in something that I have no problem saying I was uncomfortable with. At the time of filming, both actors were 12-years old and the willingness of Anderson to shoot this particular scene is disappointing. It’s certainly not graphic but it’s also not appropriate and that fact that it’s used more for comic effect is even more frustrating.

But while the story of Sam and Suzy drives the main narrative, perhaps the biggest microscope is put on the community and the fact that they are each flawed individuals forced to make important and sometimes redemptive decisions. As you look at each character you see situations unfold that bring them to the point of either doing the right thing and changing the direction of their lives or watching as things crumble in around them. In a very real sense, the disappearance of Sam and Suzy is the catalyst for some pretty real and important character transformations in Captain Sharp, Scout Master Ward, Laura, and Walt. Even Sam’s fellow Khaki Scouts are faced with their own moment of truth. 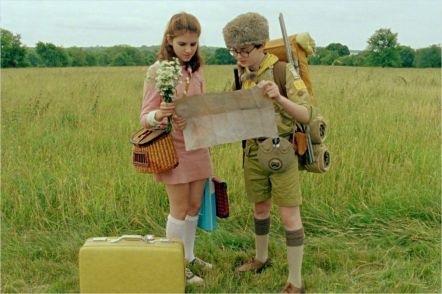 I talked about Gilman and Hayward’s performances but they’re surrounded by some equally strong work. I was particularly drawn to Bruce Willis who delivers some great laughs but through a very controlled performance that’s perfectly fitting for Wes Anderson material. Willis occasionally gets to show his acting range and this is a good Oscar caliber example of that. And I have to say, as someone who isn’t the biggest Edward Norton fan, that he was a lot of fun here. He’s goofy, nerdy, and his delusion of control that’s evident in some of the early scenes results in some of the films funnier moments. Frances McDormand is perfectly cast and Bill Murray is funny as always. I also thought Anderson favorite Jason Schwartzman was funny running around in full Khaki Scout attire.

“Moonrise Kingdom” is another Wes Anderson picture that’s a side-splitter to some but a head-scratcher to others. I laughed a lot through the film but I was also touched by its tenderness and care in addressing struggling children with feelings of isolation and insecurity. Anderson does get careless and I feel irresponsible in one brief scene but there are still several undercurrents that touch on important themes without fully diving into them. We not only see it with the children but in the community and it really worked for me. “Moonrise Kingdom” may not be for everyone but I loved its full package and stylish presentation. It’s a breath of fresh air in a comedy genre filled with raunchy movies and lazy humor. I’ll take this over them any day.