I don’t often consider the “is it necessary” question when approaching a movie remake. While too many remakes can become tiresome and many result in terrible movies, a good writer and director can provide a unique and fresh take on older material. That’s what I was hoping for from Len Wiseman’s remake of “Total Recall”, Arnold Schwarzenegger’s 1990 sci-fi action flick. Unfortunately, Wiseman’s film isn’t nearly as fun or engaging as the original. It takes away some of the more entertaining elements of the original and replaces them with a nice new glossy coat of paint.

The original “Total Recall” featured some great action and some genuinely funny moments. But it was also a relative to that great 80’s action genre so it had its share of cheese (which I love). This new version has some good action but it loses its punch thanks to its simple and lackluster story. Colin Farrell plays Quaid, an assembly line worker who has grown tired of his mundane life. About the only excitement he finds are in his reoccurring violent dreams. He decides to visit Rekall, a memory implant company who gives people exciting experiences by injecting them with artificial memories. Quaid chooses the secret agent implants but as the process begins Rekall is stormed by armed troops from the corrupt local Chancellor Cohaagen (Bryan Cranston). Quaid shoots his way out revealing a skill he never knew he had. He rushes home and tells his wife Lori (Kate Beckinsale), but she tries to kill him. Confused and no longer sure who he is, Quaid goes on the run chased by an army led by his one-time wife. 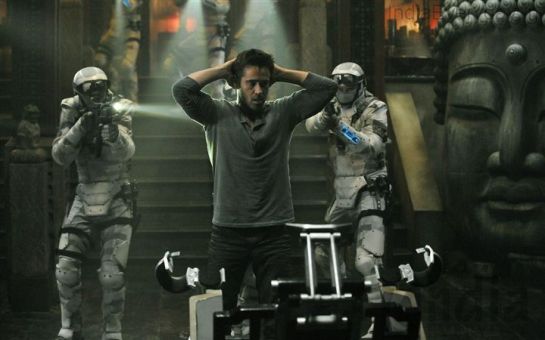 Most of the movie consists of one big chase. Quaid jumps from rooftop to rooftop, dangles from ledges, and dodges bullets while every once in a while stopping to get a little information about who he really is. Now I love good action but I eventually began to lose interest due to the lack of any real substance. Quaid does run across Melina (Jessica Biel), a girl who appeared in his nightmares, and you would expect her to add a little more to the story. But for the most part, she’s fairly shallow and basically just joins Quaid in being chased. Her character in the original film had considerable more depth. Beckinsale’s Lori gives the action scenes most of their life. She’s tough, mean, and persistent and she’s a strong female antagonist.  But the writing let’s her down as well and even she is one-dimensional.

One thing that I did like about the story was the sci-fi world it created. A chemical holocaust has ravaged earth and there are only two superpowers remaining, The United Federation of Britain which is essentially Europe and “The Colony” which is Australia. The two are connected by a massive elevator transport than runs through the Earth’s core. There’s a political tension between the two and it’s fueled by a strong resistance movement which Cohaagen is desperate to squash regardless of the cost. The special effects and CGI deliver a visually sharp and creative world. The UFB is a fancy, upscale region while “The Colony” has a dirty, over populated, inner-city look to it. Both locations are distinctly different but futuristic in their own unique ways. There are also several technologies that should make sci-fi geeks drool including a cool  hand phone implant and a wild electronic rope gun. I loved the environment and the visuals are truly impressive.

There’s little else to say about the “Total Recall” remake. Farrell tries to keep things interesting but in the end all he’s asked to do is run, jump, and look confused. I mentioned that Beckinsale was fairly fun but no other character really stands out. Even the always good Bryan Cranston is your typical cookie-cutter villain and he’s nowhere near as devious and evil as Ronny Cox’s Cohaagen in the original film. There are a few other things that keep the movie from being a complete wash-out. The special effects are dazzling, there are some good futuristic action sequences, and there are several fun little salutes to the original movie. But in the end there’s just not enough here to make this a worthwhile remake or anything more than a mediocre movie. And that’s disappointing, especially from a sci-fi fan like me.