You know, I just love movies about making movies. That’s one reason I thought the movie “Hitchcock” would be right up my alley. Another reason is that it’s about one of cinema’s greatest directors – Alfred Hitchcock. Yet another reason I was interested was because of the fantastic cast specifically Anthony Hopkins as Hitchcock and Helen Mirren as his wife Alma Reville. These and several other yummy ingredients had me really hungry for this film and after seeing it I can say that it’s quite satisfying.

But enough with the gastronomical analogies. “Hitchcock” takes place during the filming of arguably the director’s most popular and groundbreaking film “Psycho”. The movie begins just after the release of Hitchcock’s wildly successful “North By Northwest”. He still owes Paramount Pictures another film but he’s struggling to find the right one. He also feels that the studios and press believe he is past his prime and he wants to pick a bold project that will prove otherwise. He finds himself attracted to a Robert Bloch novel titled “Psycho”. He convinces Alma and his agent Lew Wasserman (Michael Stuhlbarg) that it’s the right choice but he has a harder time with Paramount president Barney Balaban (Richard Portnow). They finally reach an agreement where Hitchcock agrees to fund the picture for 40% of the profits and a Paramount distribution.

It’s really fascinating to watch the behind-the-scenes process and how Hitchcock labored to make “Psycho”. But a bigger and even more enjoyable part of the movie focuses on Hitchcock’s relationship with his wife. Hopkins and Mirren are a joy to watch. The two veteran performers dissect this marriage with surgical precision, bringing out so many interesting aspects of it. There’s a clear love that they both share for one another, but there’s an equally clear strain on their marriage brought on by the financial stress of funding the movie and by Hitchcock’s own negligence, pride, and fear of failure.

Hitch is betrayed as a self-assured man on the outside but he clearly has uncertainties on the inside. He has a wandering eye for his leading ladies and has a tendency to overindulge in food and drink – something Alma stays on him about. Alma is a talented writer herself and her uncredited contributions to Hitchcock’s creative process prove vital. Her growing frustrations lead her to begin her own collaboration with fellow writer Whitfield Cook (Danny Huston), something Hitchcock disapproves of. All of these pressures begin to wear on Hitch and ends up threatening the completion of “Psycho”.

As I alluded to, one of the real strengths of this picture are the performances. Mirren rightfully earns her award nominations that she has received. Hopkins does a fine job fleshing out this complex director under a coat of heavy prosthetics. He nails all the mannerisms and postures and his speech is almost perfect. But there’s one thing I struggled with. I never could quite get past that I was watching him do Alfred Hitchcock. Take Daniel Day-Lewis’ performance in “Lincoln”. I was so drawn in by his work that I forgot I was watching an actor play Abraham Lincoln. I never quite got to that point here. Don’t misunderstand me, it’s not a bad performance by any means. But I never completely bought into the idea that I was watching Hitchcock on screen. 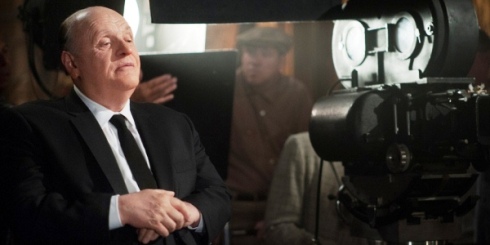 I also have to mention the other supporting performances that I really enjoyed. I’ve liked Michael Stuhlbarg since seeing him in the Coen brothers film “A Serious Man”. He’s good here too. I was also impressed with Jessica Biel as Vera Miles. She’s an actress I normally don’t care for but she gives a nice subtle performance that works really well. But an even bigger surprise for me was Scarlett Johansson as Janet Leigh. I’ve never been completely sold on Johansson as an actress but I love the Janet Leigh she portrays. She’s beautiful and sexy but she’s almost a stabilizing influence on Hitch. She’s a lot of fun to watch in the role.

“Hitchcock” has a hard time escaping that biopic feel but it’s still a really good film. I think my love for the director’s movies and my particular affection for “Psycho” added a sense of nostalgia to my viewing, but there’s a lot more to this picture than just that. There are many clever little inclusions that go hand-in-hand with Hitchcock. For instance look closely and you’ll find his shadowy silhouette that fans of his will instantly recognize. Then there’s the cool opening and closing of the film that hearkens back the “Alfred Hitchcock Presents” days. These nifty treats fit in well with the solid script and wonderful performances and anyone with the slightest interest should come away well pleased.

I don’t often consider the “is it necessary” question when approaching a movie remake. While too many remakes can become tiresome and many result in terrible movies, a good writer and director can provide a unique and fresh take on older material. That’s what I was hoping for from Len Wiseman’s remake of “Total Recall”, Arnold Schwarzenegger’s 1990 sci-fi action flick. Unfortunately, Wiseman’s film isn’t nearly as fun or engaging as the original. It takes away some of the more entertaining elements of the original and replaces them with a nice new glossy coat of paint.

The original “Total Recall” featured some great action and some genuinely funny moments. But it was also a relative to that great 80’s action genre so it had its share of cheese (which I love). This new version has some good action but it loses its punch thanks to its simple and lackluster story. Colin Farrell plays Quaid, an assembly line worker who has grown tired of his mundane life. About the only excitement he finds are in his reoccurring violent dreams. He decides to visit Rekall, a memory implant company who gives people exciting experiences by injecting them with artificial memories. Quaid chooses the secret agent implants but as the process begins Rekall is stormed by armed troops from the corrupt local Chancellor Cohaagen (Bryan Cranston). Quaid shoots his way out revealing a skill he never knew he had. He rushes home and tells his wife Lori (Kate Beckinsale), but she tries to kill him. Confused and no longer sure who he is, Quaid goes on the run chased by an army led by his one-time wife.

Most of the movie consists of one big chase. Quaid jumps from rooftop to rooftop, dangles from ledges, and dodges bullets while every once in a while stopping to get a little information about who he really is. Now I love good action but I eventually began to lose interest due to the lack of any real substance. Quaid does run across Melina (Jessica Biel), a girl who appeared in his nightmares, and you would expect her to add a little more to the story. But for the most part, she’s fairly shallow and basically just joins Quaid in being chased. Her character in the original film had considerable more depth. Beckinsale’s Lori gives the action scenes most of their life. She’s tough, mean, and persistent and she’s a strong female antagonist.  But the writing let’s her down as well and even she is one-dimensional.

One thing that I did like about the story was the sci-fi world it created. A chemical holocaust has ravaged earth and there are only two superpowers remaining, The United Federation of Britain which is essentially Europe and “The Colony” which is Australia. The two are connected by a massive elevator transport than runs through the Earth’s core. There’s a political tension between the two and it’s fueled by a strong resistance movement which Cohaagen is desperate to squash regardless of the cost. The special effects and CGI deliver a visually sharp and creative world. The UFB is a fancy, upscale region while “The Colony” has a dirty, over populated, inner-city look to it. Both locations are distinctly different but futuristic in their own unique ways. There are also several technologies that should make sci-fi geeks drool including a cool  hand phone implant and a wild electronic rope gun. I loved the environment and the visuals are truly impressive.

There’s little else to say about the “Total Recall” remake. Farrell tries to keep things interesting but in the end all he’s asked to do is run, jump, and look confused. I mentioned that Beckinsale was fairly fun but no other character really stands out. Even the always good Bryan Cranston is your typical cookie-cutter villain and he’s nowhere near as devious and evil as Ronny Cox’s Cohaagen in the original film. There are a few other things that keep the movie from being a complete wash-out. The special effects are dazzling, there are some good futuristic action sequences, and there are several fun little salutes to the original movie. But in the end there’s just not enough here to make this a worthwhile remake or anything more than a mediocre movie. And that’s disappointing, especially from a sci-fi fan like me.