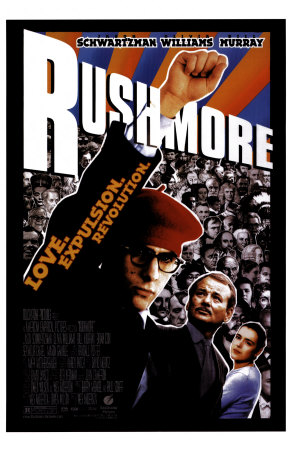 Whenever you’re watching a Wes Anderson movie, there’s no denying that you’re watching a Wes Anderson movie. The writer and director has made a number of films that feature profound uniqueness that set them apart. His quirky humor is unique in itself but Anderson is also known for his own visual style and presentation, his clever use of music, and familiar reoccurring themes that you can’t help but notice. In 1998, Anderson released “Rushmore”, his second feature film and one of his many collaborations with old friend and co-writer Owen Wilson. “Rushmore” is a perfect introduction to Anderson and his special brand of humor. And while the movie – just like all of Anderson’s pictures – won’t appeal to everyone, I found it to be an infectious comedy from start to finish.

“Rushmore” was the film that launched Wes Anderson’s career. He and Wilson began working on the story a few years prior to the release of his first film “Bottle Rocket”. The two took memories and experiences from their childhoods to form the foundation of this truly hilarious story which also flirts with some darker underlying themes. The movie also launched the career of Jason Schwartzman who plays Max Fischer, an eccentric and egocentric 15 year-old student at Rushmore Academy. Max is a underachiever in the classroom but is by far the most extracurricular student in the school. He’s the leader of school groups ranging from the French Club and the Debate Team to the Calligraphy Club, the Rushmore Beekeepers, and a goofy dodgeball club called Bombardment Society. It turns out Rushmore is his life but he finds himself in jeopardy of expulsion due to his horrible grades.

Max develops an unusual friendship with a wealthy but disenchanted business man named Herman Blume played by Bill Murray. Murray is fantastic and he delivers some of the story’s more straightforward laughs but he also adds lots of humor through his straight-faced, deadpan performance. Blume is a miserable fellow not at all happy with his life. But despite his troubles, particularly with his whacked out kids, he’s drawn to Max, so much so that he offers him a job and funds some of Max’s outlandish school “projects”.

But Max and Herman’s friendship takes a hit when they both end up falling in love with the same woman, Ms. Cross (Olivia Williams), a 1st grade teacher at Rushmore. Ms. Cross becomes aware of Max’s infatuation with her and tries to head it off. But Max is impervious to the truth that she is too old for him. It’s here that the movie is really intriguing. Their “relationship” leads to some really funny moments in the picture. But on the flip side, it’s here that we do get hints of a darker more troubling component to the story. There were several scenes where the internal struggle within Max felt real and in turn made him into a really sympathetic character. But Anderson would then draw out a good laugh from the most unexpected place. So it’s safe to say that “Rushmore” had the uncanny ability to make me laugh out loud in one scene and then feel uncomfortable in the very next one. In other words, there’s much more going on underneath the surface.

Anderson also employs several visual gimmicks that I’ve noticed in the handful of his other films that I’ve seen. Some people don’t really respond to his approach but I thoroughly enjoy it. He never frames an ugly shot and while some of “Rushmore” quick snippets may seem jarring to some, I think they brand the film with a quirkiness that I love. Helping out “Rushmore’s” presentation is the interesting choices of music including a selection of 60’s pop songs that feel surprisingly at home even though there doesn’t seem to be a single connection to the story. But again (at the risk of sounding like a broken record), this is typical for a Wes Anderson picture.

True comedy is subjective and that is never more obvious than with “Rushmore”. Many people wrestle with Anderson’s unique sense of humor and visual flair. But I found myself laughing all through this movie and the style of storytelling really helped the quirky humor. The cast is superb and it’s easy to see why Schwartzman took off from here and why this helped rejuvenate Bill Murray’s career. “Rushmore” is a genuinely funny movie laced with some darker undertones that will cause you to laugh and squirm during the same scene. Considering the majority of modern comedies, that’s something I can really appreciate.