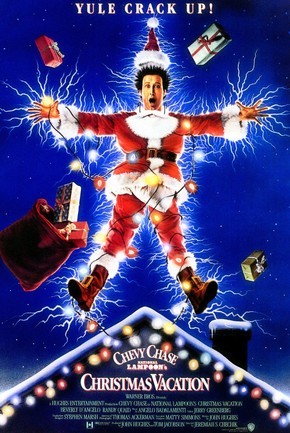 There may not be another Christmas movie with more laughs than “National Lampoon’s Christmas Vacation”. Moviegoers have followed the Griswold family on a cross-country vacation, a European vacation, and a Las Vegas vacation. But arguably the funniest of the “Vacation films” focuses on their attempt at a “good old-fashioned family Christmas”. Anyone familiar with the Griswolds knows this is easier said than done and the results are nothing short of pure hysterical fun for the audiences. But while this film does capture many familiar and funny family situations surrounding Christmas time, it also features some of that typical National Lampoon naughtiness that works against the holiday appeal that it has as well.

Chevy Chase reprises his role as Clark Griswold, a well-meaning but moronic husband and father who sets out to have a traditional family Christmas. That includes venturing out in the wild to find a real Christmas tree, decorating the outside of his house with Christmas lights, and inviting his parents and in-laws to his home for the holidays. Naturally there is not a single one of Clark’s good efforts that work out as planned mainly due to his lovable stupidity. Beverly D’Angelo is back as Clark’s wife Ellen who, as in the other movies, perfectly understands her husband’s propensity for overdoing things. She’s a sometimes calming voice of reason and a perfect complement to her nutty husband.

But aside from Clark and Ellen the movie is filled with great characters. E.G. Marshall steals several scenes as Clark’s cantankerous father-in-law Art. He grumbles and gripes and never passes up a chance to put Clark down. Doris Roberts is also good as Ellen’s mom who is a little too friendly with the booze. And then there’s John Randolph who is great as Clark’s supportive father. I also have to mention William Hickey as the stogie-chomping Uncle Lewis and Mae Questel as the senile Aunt Bethany. They arrive later in the film but inject their own heavy doses of laughs. But the real star of the movie is Randy Quaid as cousin Eddie. He and his family show up uninvited and that’s when things really turn wacky. Quaid’s real life antics have proven that this is a part that suits him well. He is absolutely hilarious as a dimwitted bum and moocher who is family nonetheless. Everything from his wardrobe to his mannerisms will remind you of someone that you know and he gobbles up every scene that he is in. It’s safe to say that he steals the movie. 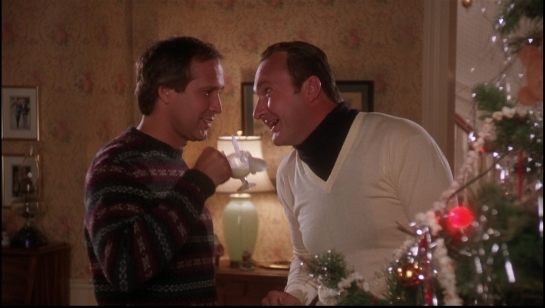 We get all of the standard “Vacation” occurrences. Several times Clark completely goes out of his mind. Several times he almost kills himself. And of course things go from bad to worse as every one of Clark’s good intentions blow up in his face. And we the audience laugh all the way through it. But that same National Lampoon Standard is also something that keeps the movie from being as great as it could be. It seems they just couldn’t resist putting in several doses of innuendo and raunch, just enough to clash with the holiday spirit that it conveys elsewhere. I know this isn’t a big deal for many people, but I saw this as a wasted opportunity that strips the movie of its Christmasy, family-friendly potential. There are still some incredibly funny moments. But for me, you can’t just set the family down and enjoy it, unless you DVR a TV version.

There are so many scenes and so many lines in “Christmas Vacation” that you just can’t forget. Aside from the few seemingly compulsory instances of vulgarity, its a hilarious comedy that really works. It takes so many of the familiar family and Christmas quirks and accentuates them as only the Griswolds could. It’s hard to believe that “Christmas Vacation” is already 23 years old. But there’s no denying that in that time it has evolved in to a holiday classic. It’s a movie that so many watch every Christmas. I know we do.