Most of us remember the horrific 2004 Indian Ocean tsunami and the catastrophic devastation left in its wake. It was a tragedy on an epic scale and lives around the world were altered forever. “The Impossible” tells the incredible true story of a family who survived this terrible event against truly impossible odds. Going in I was expecting a potentially good disaster flick. But to categorize “The Impossible” as just a disaster movie would be to criminally throw aside the qualities that make this one of the best movies of 2012. You can dismiss it if you like, but I found it to be a devastating yet moving experience unlike anything I’ve ever had with a simple “disaster movie”.

But perhaps where this movie resonated with me the most was in its depiction of a parent’s self-sacrificial love for their children. We see motherly and fatherly instincts to protect their children in the face of danger, instincts that many of us can relate to. But hey, we’ve seen this before in the movies, right? Yes we have but rarely is it depicted with such realistic emotion. Everything coming out of Ewan McGregor and Naomi Watts is authentic and completely believable. There isn’t an ounce of artificiality to these characters or how they react to their situations. It’s that genuineness that grabs us and latches us on to both of them.

For those that don’t know, McGregor and Watts play Henry and Maria Belon. They’ve brought their three sons Lucas, Thomas, and Simon along for a Christmas vacation at an beachfront resort in Thailand. Everything is great until, on a warm sunny day as the family plays by the pool, the tsunami hits. The family is splintered by the force of the waves and the rest of the movie documents their quest for survival and to be reunited. I talked about how good McGregor and Watts are but let me also share a little love for the children. The three child actors are fantastic especially newcomer Tom Holland as the oldest son Lucas. He gets the majority of the work between the three and he’s very good. He brings out a toughness and tenacity from his character while also having plenty of those moments that remind us that he’s just a child. It’s an attention-getting performance.

But again. a lot of credit has to go to director J.A. Bayona. It’s amazing that he has only a handful of credits under his belt. The way he lays out the story both narratively and visually shows a skill and technique usually reserved for more seasoned directors. I’ve talked enough about the story but I have to speak about the presentation. I loved the way Bayona uses sound in the first half of the movie. He has a very specific and strategic way of engaging your sense of hearing. He preps your ears in the pre-tsunami scenes by accentuating the sounds of the beautiful environment. Those sounds dramatically change in the post-tsunami scenes where we hear things like raging waters and far away screams. There is also the tension of every distant sound that may resemble the roar of another wave. 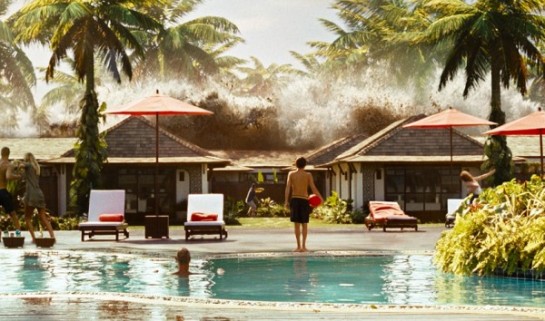 The special effects are also intricate in drawing us into this disaster along with this family. The tsunami and the furious waters are shown just enough to shake us and then ground us in the situation. It’s never overused in an attempt to get more reaction from the audience. It steers clear of that which is one reason why I feel the scrutiny it’s received is misguided. Some have taken issue with the movie for depicting the catastrophe. But I think this is one of the most thoughtful and respectful treatments of a sensitive subject like this that I’ve seen. There have been movies that have exploited traumatic events but this isn’t one of them.

I loved “The Impossible” for a variety of reasons. It avoids soaking us in conventional sentimentality. Instead it tells an intensely affecting story and allows our senses to take it all in and react in our own way. And trust me, I reacted. I teared up more in this movie than in any other I’ve watched and I never once felt manipulated. This is a movie that will wear you out but then pick you back up. It shows us the resolve that lies in the heart of people and reflects how the best comes out of us during the worst of circumstances. This movie will stick with you and even though its a tough watch its a rewarding one and shouldn’t be missed.

17 thoughts on “REVIEW: “The Impossible””

Leave a Reply to The Phage Cancel reply