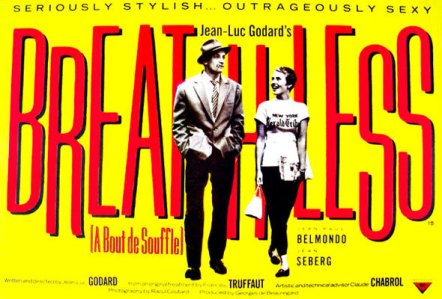 There are certain movies that will always be remembered for their undeniable influence. Such is the case with “Breathless”, the first feature film from acclaimed director Jean-Luc Godard and a major player in the French New Wave of the late 1950’s and early 1960’s. French New Wave was a bold and experimental movement that toyed with new techniques of filmmaking and storytelling. The stories were often rooted in and influenced by the social climate of the time and ambiguity, realism, and sometimes romanticism were key tools used to craft these stories.

French New Wave also had several distinguishable visual techniques that set it apart from the contemporary filmmaking of that time. New Wave directors experimented with long takes, creative tracking shots, handheld cameras, and fast scene changes. These techniques originated in low-budget necessity but they were also intended to buck the traditional brand of filmmaking. Godard and “Breathless” were instrumental in defining the movement. Nearly every technique unique to French New Wave can be found in “Breathless” and it has certainly made an important mark in cinema history. 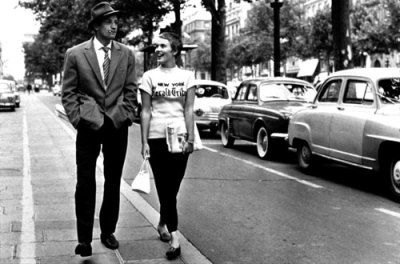 The movie follows around a young criminal named Michel (Jean-Paul Belmondo). His forte is stealing cars and petty crimes but things go bad when a simple car heist results in him killing a cop. He ends up on the run in Paris trying to secure some money to make his escape. Michel is not a good guy and it’s hard to get that impression from the film. But an argument could be made that, in a sense, the movie glamorizes Michel’s lifestyle. There is some legitimacy to that but I think it overlooks a major part if the story. Godard does try to emphasis a sense of cool about Michel through his freewheeling attitude, dangling cigarettes, and thumb rubs across his lips. But I feel his coolness is more his perception of himself – a misguided perception more rooted in arrogance than reality.

It’s a combination of his arrogance and his heart that proves to be his biggest obstacles. He fashions himself after movie stars such as Humphrey Bogart and he seems infatuated with his own press. Throughout the movie we constantly see him buying newspapers in an attempt to get information no doubt, but also to bask in his own headlines. He walks the streets of Paris, impervious to his wanted status, with nothing more than a pair of sunglasses to hide his identity. Even as scrolling marquees across the city report of the police manhunt drawing closer, Michel still takes to the streets of Paris with an almost cocky sense of invincibility.

He also finds himself smitten with Patricia (Jean Seberg), a young American student at the Sorbonne and aspiring journalist. She’s a seemingly insecure young lady who ends up falling for Michel but with an ever-present sense of uncertainty. Michel often insults her and talks down to her yet she grows more and more fond of him. I believe it’s because she sees through his tough guy facade and finds something she can cling onto regardless of how unwise it is. She struggles with whether to stay with Michel or not but even after finding out what he’s done she can’t just walk away. In a very different way Michel finds himself in the same boat. It’s some compelling stuff.

“Breathless” is a little rough around the edges yet it’s exhilarating cinema. Much of the script was written as they were filming and it features a lot of improvisation. But I love the spontaneity that comes along with that both narratively and visually. Hand-held cameras, a signature of the movement, are tremendously effective both in giving it a unique style as well as capturing some of the beauty of Paris. In fact, “Breathless” features some of the best views of the city you’ll find in cinema. The movie is also recognized for its fresh and bold use of jump cuts – a film editing technique where a scene makes quick jumps forward. There are so many filmmaking devices in “Breathless” that have influenced directors for years and still do today. And even though the storytelling structure may feel a bit jarring, the film is hypnotic and its mark on cinema cannot be overstated.