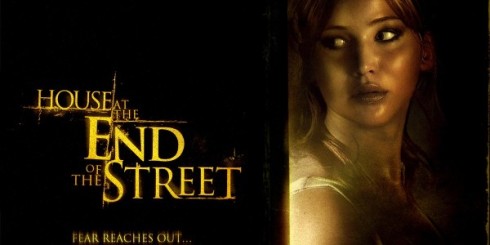 Am I starting to sense a trend here? Have you noticed that after getting some serious critical acclaim a number of young actresses are immediately running out to do soft PG-13 horror pictures? After really finding her way onto the critics radar with “Martha Marcy May Marlene”, Elizabeth Olsen quickly followed it up with “Silent House”. After making a huge splash in 2011 and giving what may end up being an Oscar-winning performance in 2012’s “Zero Dark Thirty”, Jessica Chastain started off 2013 with “Mama”. And then there’s “House at the End of the Street”. Jennifer Lawrence first wowed critics with “Winters Bone” and then blew up the box office with “The Hunger Games”. She followed it by dipping her toes into the horror genre with a film that’s decent enough and relatively harmless, but that still feels like a quick money draw from her recent success.

Lawrence plays Elissa Cassidy, a high school student who moves to a small wooded town with her recently divorced mother Sarah (Elisabeth Shue). They get a great deal on a beautiful home and they later find out why. It seems the property values have gone down following the gruesome murders of a couple in the house next door. Elissa and Sarah begin to find out more about the murders from the locals. But there is the question of what is fact and what is just gossip? They learn that the couple’s son Ryan (Max Thieriot) is living alone in the house. He’s been ostracized by many in the community and he’s the subject of so many rumors and speculations. He becomes the centerpiece of much of the film’s mystery.

Obviously Jennifer Lawrence is the real draw here and as you would expect she does a good job. But I have to say this isn’t challenging material. She does a lot of the same old stuff that you would expect from a movie like this. About the only opportunity she gets to flex her acting muscles are in the scenes with Shue. Elissa and Sarah don’t have the best relationship and the film’s better dramatic moments are when these two are hashing it out. Unfortunately we don’t get to much of it. As good as these moments are, they’re just thrown in here and there and they feel like an afterthought. 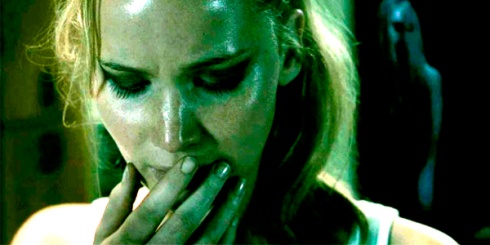 While “House at the End of the Street” is advertised as a horror movie and it does have its moments of standard horror fare, in many ways it feels more like a thriller – not a great one, but a thriller nonetheless. Other than a couple of sudden blasts of loud music, the film doesn’t have any genuine scares. And it never really succeeds in creating the tense and creepy atmosphere it shoots for. But this isn’t a terrible movie. I actually found myself interested in the secrets and twists surrounding the murders in the house next door. The story also remains entertaining despite some obvious plot holes and unintentional silliness. I was never bored and I appreciated some of what the filmmakers were trying to do.

I think the biggest problem with “House at the End of the Road” is that it’s a really average movie. There’s not one thing that it does exceptionally. On the other hand there are very few egregious and crippling flaws. It’s not a horrible movie but it doesn’t do anything to set itself apart. That’s why it’s a decent movie to check out on DVD on a rainy day. But expect to have forgotten all about it the next day. It’s a ‘one-and-done’ film in my book but it’s a fairly entertaining one. It just has no staying power and it won’t challenge you with anything bold and new. It turns out to be more of the same and that’s a shame.

32 thoughts on “REVIEW: “House at the End of the Street””