“Remember, remember the 5th of November”. These are the first words mentioned in the 2005 thriller “V for Vendetta”. It’s a phrase referencing the Gunpowder Plot of 1605. This failed attempt to blow up The House of Lords has oddly become a celebrated event and it serves as the inspiration for this movie’s masked vigilante known as V. This is a film based on a comic book written by Alan Moore which was distributed by Vertigo, a brand of DC comics. The screenplay was written by the then Wachowski brothers which instantly caused concern for me. I’ve had a hard time latching on to their other work but I entered this with an open mind hoping they would avoid the traps they normally fall into.

The movie starts off on a good note introducing us to its fascist dystopian near-future world. It also introduces us to V, an underground resistance fighter sporting a cool Guy Fawkes mask and a belt full of blades. He’s played eloquently by the fluid-tongued Hugo Weaving. He rescues a young woman named Evey (Natalie Portman) from three alley thugs and then goes on to reveal to her his plans to spark a revolution. His methods (which could understandably be called terrorism) disturbs Evey but she also finds herself mesmerized by the words and reason of the mysterious V. 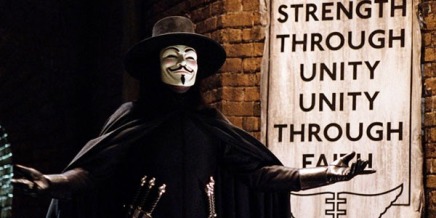 At first the oppressive and tyrannical world we are thrown into is fascinating. The government has gained supreme power and High Chancellor Adam Sutler (John Hurt) is pulling all the strings. The government controls the flow of information and Sutler ultimately decides what’s acceptable in every facet of the people’s lives. The citizenry sit in front of their TVs in an almost hypnotic state while the government filters and alters the “news” and “entertainment”. The totalitarian rule is realized in a variety of alarming ways which makes V’s passion and cause more sympathetic.

But as with most of the Wachowski’s other work they don’t know when to stop. After drawing us into this disturbing yet entrancing world they created, they don’t focus on unwrapping the story within it. Instead they bombard us with contrived and heavy-handed political sermonettes and pop shots. They throw out a crazy amount of soapbox issues and irrational comparisons which they have every right to do. The problem is they become so obviously forced and they do nothing to help the greater story. The social issues, the Bush bashing, the ‘blame America’ nonsense, the selective religious critique, rendition, blah, blah, blah. The second half of the film is filled with these injections that make it feel like a left-wing political propaganda piece, something the movie is supposedly speaking against.

These things mixed with the sometimes bloated dialogue ultimately made “V for Venetta” an almost laborious experience. That’s a shame because there are things the movie does well particularly in the first half. I mentioned the fantastic early impressions of the world and Weaving’s brilliant performance even during some of the Wachowski’s more blabber-heavy scenes. But the excess crap eventually weighs the thing down and at over 130 minutes it was a tad tough to endure. Director James McTeigue does the movie no favors either. There are all kinds of pacing issues and his dull camera tempered the film which seemed to be screaming for a bit of style. And he never develops enough tension and intrigue past the first act – a problem we also get in his most recent film “The Raven”. Visually the movie underwhelms and, aside from a couple of impressive explosions, it resembles a TV production. All these things left me wanting more. 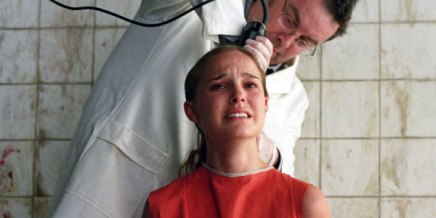 The most frustrating thing about “V for Vendetta” was that it had me during the first half. Despite its technical shortcomings I was wrapped up in the story and I found myself anxious for Hugo Weaving’s next scene. But when things come unglued I was just anxious for the ending. The Wachowskis don’t seem to understand when they’ve created a good thing. Here they take the great message built around an oppressive government and squash it with their own preachy hard-left politics. There’s nothing wrong with that in the hands of more capable writers and filmmakers, but here the latter politics don’t propel the movie. Instead they feel far more self-serving.

I know this movie has its share of followers but for me it’s a case of squandering a good thing. It goes off the rails and leaves nothing of any substance. There is a good message hidden somewhere under the clunky and peremptory politics but I lost my grasp of it halfway through. That’s unfortunate because I really wanted to like this movie. But in the end I can see why Alan Moore disassociated himself from it even if his overall problems with it were a little different than mine.