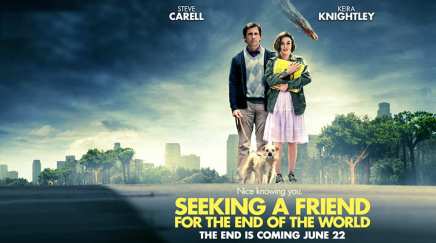 The film “Seeking a Friend for the End of the Earth” has several interesting things going for it aside from its ridiculously long title. Writer and director Lorene Scafaria takes a very familiar movie subject but looks at through a very unique and compelling lens. She tosses some romance and some humor into her story and allows her two lead performers the room to bring it all to life. These cool nuances are what initially drew me to this picture. It’s such a shame that it didn’t work nearly as well as it should have.

The clever and funny opening scene really got my hopes up and it sets an interesting tone. Dodge Peterson (Steve Carell) and his wife Linda (played in the film by his real life wife Nancy Carell) are sitting in their car listening to a news update on the radio. The DJ tells of a failed last-ditch effort to stop a 70 mile wide asteroid from crashing into Earth and ending the world. The two find out that the asteroid (strangely named Matilda) is expected collide with the planet in only three weeks. The DJ ends the report by saying “For your up to the minute coverage of the countdown to the end of days along with all your classic rock favorites, Q107.2”. A Beach Boys tune follows the devastating news and Nancy opens the car door and leaves Dodge on the spot.

From there Dodge is basically a rudderless ship. He’s a man who looks like he’ll spend the final few days of Earth’s existence alone, that is until he sees his neighbor Penny (Keira Knightley) crying outside his apartment window. She’s an eccentric girl who left her loser boyfriend Owen (Adam Brody) and has just realized she has missed the last of the flights to England where her family lives. Dodge brings her inside which begins a quirky but appealing little relationship. As the apocalypse nears these two lost souls set out together, each after for something different but neither able to see that what they want is right in front of them. 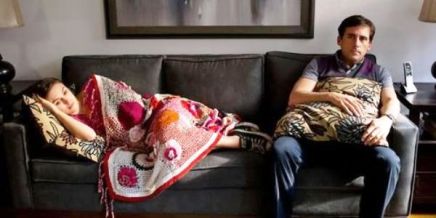 The movie begins pretty strong, using its unique perspective in several funny and intriguing ways. Unfortunately the comedy flames out as the movie progresses and I couldn’t help but think that Scafaria played all of her cards in the first half. There are some interesting questions and subtle examinations wrapped up in the movie’s hit and miss humor. We see people’s reaction to the impending end of days range from shameless hedonism to rioting and violence. But the movie also tinkers with smaller questions and in many ways these were the better moments for me. There are also funny little mentions of End of the World awareness concert and opportunistic high premium Armageddon insurance packages. But there aren’t enough of these moments as the movie progresses.

But this film isn’t a total write-off mainly due to the unlikely and offbeat chemistry of the two leads. Carell is in familiar territory and his nerdy, square peg Dodge seems right up his alley. But his performance is more subdued which I found to be more effective. The bigger surprise was Knightley who showed a nice comedic side. These two are asked to move back and forth between comedy and deeper drama which they handle beautifully. The drastic shifts in tone don’t always help the film but the performers nail it. Many have criticized the ending which is soaked in sentimentality. For some it’s popular to treat sentiment in movies like a curse word. I don’t agree with that and while it is a little heavy here, I think it does work in the end.

So what do I make of a movie with tone issues, a draggy middle, and inconsistent humor but that still manages to entertain? “Seeking a Friend for the End of the Earth” has its share if flaws but its also has several things that really sold me on what Scafaria was going for. So this was a mixed bag for me. It’s a film worth checking out but you just may leave with the feeling it could have been so much more. I know I did.

33 thoughts on “REVIEW: Seeking a Friend for the End of the World””